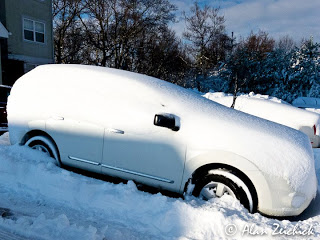 Visiting SD Times’ New York office this week, I enjoyed a few decent snowfalls. That reminded me of why I moved from New England to San Francisco back in 1990… our New York office is a nice place, but I wouldn’t want to spend the winter here.

Listening to the radio this morning after about a foot of snow fell, an analyst (I forget who) said that when employees work from home because they can’t get to the office, they work at approximately 80% efficiency.

Of course, that’s only for some types of workers. For the most part, that would include software developers, especially if they have access to a powerful laptop or desktop computer at home, and have either brought work home or can access their files over the Internet. (That’s where the cloud can come in handy.)

By contrast, some type of workers can’t be efficient at all when working at home. Sorry, gas station attendant, mail-room clerk, operating-room nurse, restaurant chef, train driver, firefighter, produce manager, or developer without access to a computer: You’re not 80% as valuable to your employer if you’re snowed in.

Let’s think about that 80% figure. In some ways, brain-centric workers like programmers should be more productive when working at home – unless, of course, they’re having to manage having their children home from school as well (snow day), or unless they don’t have access to their tools. Why more productive? No meetings, for a start. No loss of time for the commute. No wasted time around the proverbial water cooler.

On the other hand, there are a myriad distractions at home. The television. The fridge. The temptation to go back to bed for a nap. Pets. The fridge. Deciding to run some errands after the streets are cleared. Building a snowman. The fridge. And so-on.

How efficient is your organization when your employees can’t get to the office? Are there steps you can take to prepare for that contingency? And might your developers benefit from having an occasional planned “snow day” every so often, so they can work at home, heads-down in a change of venue, without meetings and socialization? Or would the lure of the fridge be too tempting?

No more adult supervision on the Starship Google