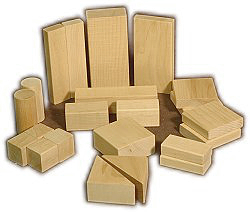 It looks like the tech industry is hiring more women. Maybe. Maybe not. The statistics are hard to interpret. Also, it’s unclear if the newly hired women are performing technical or other jobs.

I’m looking at a blog from the New York Times, “An Uptick in the Hiring of Women for Tech Jobs,” which correctly says that:

There are signs that tech companies are hiring more women, but women still appear to make up far less than half of all new hires in the industry.

If we want more women software engineers, let’s encourage girls to think like engineers. That means encouraging play that incorporates both design and construction — and in a tactile way, not only through tablet apps.

When I was young, my father chopped 2x4s and dowels into various sized blocks. Some square, some round, some rectangular, some triangles. No paint, no stain, just some sanding — and the imagination is unlocked.

Today, in addition to wood blocks, construction blocks like Lego, Duplo or Megablox are what I’d give a young child, girl or boy. Bright colors are great. If there are “boy colors” like red or blue, and “girl colors” like pink and purple, I’d buy equal quantities of both and mix them together, to provide the widest possible color palette. I would buy lots of big buckets of plain old blocks, not kits where you follow directions and assemble a specific toy. That’s great for buying furniture at Ikea – but not at inspiring creativity and hands-on imagination.

What do you think: Step in the right direction, a marketing ploy, or both? 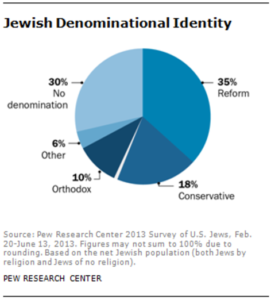 Did you know that more than one-third of all U.S. Jews identify with the Reform Movement — and that Reform is, by far, the largest Jewish denomination?

Did you know that 55% of U.S. Jews raised within the Reform Movement stay Reform?

Did you know that social justice, a cornerstone of Reform Judaism, is of high importance to American Jews?

Did you know that 94% of U.S. Jews say they are proud to be Jewish?

Did you know that three-quarters of U.S. Jews say they have “a strong sense of belonging to the Jewish people”?

Those are some of happier findings from “A Portrait of Jewish Americans,” a major report released by the Pew Research Center on October 1. This study has galvanized conversations in the Jewish world, and in particular in the Reform movement’s three main pillars: the Union for Reform Judaism, the Central Conference of American Rabbis, and Hebrew Union College-Jewish Institute of Religion.

It’s gratifying that 35% of all U.S. Jews identify with the Reform movement. By contrast, 18% identify with Conservative Judaism, 10% with Orthodox Judaism and 6% with smaller groups like the Reconstructionist and Jewish Renewal movements.The rest say they do not identify with any particular Jewish denomination at all.

The study’s results don’t lead to optimism about progressive Judaism in the United States. To quote from analysis of the study sent by the URJ to synagogue presidents, challenges to organizations like Peninsula Temple Sholom include:

What does all this mean? Sarah Bunin Benor, associate professor of Jewish studies at HUC, wrote in the Jewish Daily Forward:

No matter how we quantify couples, the study clearly indicates that intermarriage has changed the Jewish community. The growth of “Jews of No Religion” (currently estimated at 1.2 million) may be influenced by the rise of secularism in the United States, but its most important factor is the growing number of Jews with mixed ancestry. While some will bemoan this number, I consider it a positive development: Many people with mixed Jewish-Christian ancestry are still proud enough of their Jewish heritage to identify themselves as Jews to a stranger on the phone. Not all people of mixed ancestry are willing to cast their lot with the Jewish people in this way, as we see in the much larger number of Americans classified as “of Jewish background,” estimated at 2.4 million.

Findings like these focus our attention on the growing diversity of the Jewish community. In short, Pews’ “Portrait of Jewish Americans” reminds us there is no such thing as a typical Jew.

That’s potentially a large drop from only a decade ago. According to an article by Dan Pine in the J Weekly, “That’s a far cry from the numbers cited in a 2004 demographic study commissioned by the S.F.-based Jewish Community Federation, and a similar one in 2011 from the Jewish Federation of the East Bay. Together, those surveys estimated the Bay Area Jewish population at approximately 360,000. So where did everyone go?”

There’s no good answer, in part because there’s no consistent definition of what it means to be Jewish for these research studies. Do they count those who follow matrilineal descent, which is important for Orthodox and Conservative Jews? Do they count everyone who self-identifies as a Jew? Or who live in a Jewish household? Or secular Jews who are unaffiliated? There’s no commonality.

A challenge — or perhaps opportunity — lies around the young Jews who identify as spiritual but not religious. As Rabbi Rick Jacobs, president of the Union for Reform Judaism, wrote in a blog post, “Don’t Give Up on Jews Who Care About Being Jewish,”

As we continue to debate the best communal responses to the Pew study, I believe we must not give up on those Jewish Americans who do not fit into the organized Jewish world’s neat binary categories: affiliated/unaffiliated, religious/cultural, committed/uncommitted, lovers of Israel/critics of Israel. The truth is more complex and the Jewish future will be brighter when we learn to broaden and deepen the Jewish tent.

The professional and lay leadership of Peninsula Temple Sholom are following the discussion around these studies closely, trying to understand what they mean for our congregation — and our community. With our focus on Sukkat Shalom and Relational Judaism, our warm embrace for interfaith families, and our initiatives to take action to promote social justice, we believe that PTS is well positioned for the future.

That does not mean that we are complacent.

Early this year, PTS hosted a symposium of Reform Judaism in the West, and in September we brought in Dr. Ron Wolfson to help our lay leaders strengthen our beloved congregation. The board has learned a lot, and will continue to research, study and think about long-term and short-term actions.

One new initiative, focused on building community and driving social justice, is Kolot: Connecting Our Voices. Learn more and sign up at http://www.sholom.org/kolot.

I’d love to hear your thoughts about the Pew study, the Brandeis study, and the future of Reform Judaism in the Bay Area.