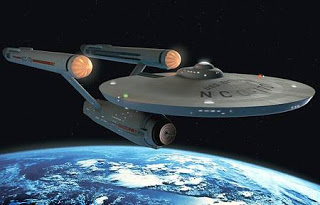 Larry Page is taking over the command chair of the Starship Google. He replaces Eric Schmidt in the CEO role, who was brought in a decade ago to provide adult supervision, and who moves into an advisory position as executive chairman.

Before he joined Google, Schmidt was already a legend in the computer industry. He was praised for his work at Xerox PARC, Sun and Novell, renowned for both his engineering skills and business acumen.

Hiring Schmidt as CEO back in 2001 was the smartest move that the brilliant, but immature, Google co-founders Page and Sergey Brin could have done. Page and Brin constantly pushed the envelope of technology – they didn’t know what couldn’t be done, and so they did it anyway. Schmidt make it all work by doing all those pesky details that entrepreneurs don’t want to do

You can read Schmidt’s blog post about this change, where he says,

But as Google has grown, managing the business has become more complicated. So Larry, Sergey and I have been talking for a long time about how best to simplify our management structure and speed up decision making—and over the holidays we decided now was the right moment to make some changes to the way we are structured.

Now, I don’t know the real story, but of course, it’s never as simple as that. Did Schmidt want to step back and focus on other interests? Was Page feeling that after a decade of the older engineer’s tutelage, he was now ready for his moment in the spotlight? We’ll probably never know.

I’m concerned about what this change means for Google. When you move beyond its core business of search, AdSense and AdWords, the company feels incredibly scattered, running in all directions at once.

In short, although Google makes tons and money and gobs of profit, the company lacks focus. Now, here are the questions:

1. Does the lack of focus come from Schmidt? Doubtful.

2. Does the lack of focus come from Page and Brin? Probably.

3. Was Schmidt able to rein in Page and Brin? Maybe at first, but it seems unlikely.

4. Was Schmidt feeling frustrated? Well, if my premise is correct, who wouldn’t be?

My guess is Schmidt threw up his hands. I wonder how Google will run without his adult supervision… but if my theory is correct, it’s been pretty much that way already for the past few years.

The wonderful world of platform fragmentation