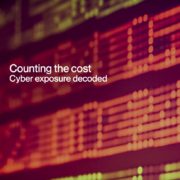 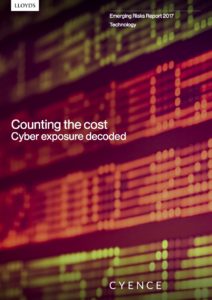 A major global cyberattack could cost US$53 billion of economic losses. That’s on the scale of a catastrophic disaster like 2012’s Hurricane Sandy.

Lloyds of London, the famous insurance company, partnered with Cyence, a risk analysis firm specializing in cybersecurity. The result is a fascinating report, “Counting the Cost: Cyber Exposure Decoded.” This partnership makes sense: Lloyds must understand the risk before deciding whether to underwrite a venture — and when it comes to cybersecurity, this is an emerging science. Traditional actuarial methods used to calculate the risk of a cargo ship falling prey to pirates, or an office block to a devastating flood, simply don’t apply.

Lloyds says that in 2016, cyberattacks cost businesses as much as $450 billion. While insurers can help organizations manage that risk, the risk is increasing. The report points to those risks covering “everything from individual breaches caused by malicious insiders and hackers, to wider losses such as breaches of retail point-of-sale devices, ransomware attacks such as BitLocker, WannaCry and distributed denial-of-service attacks such as Mirai.”

The worry? Despite writing $1.35 billion in cyberinsurance in 2016, “insurers’ understanding of cyber liability and risk aggregation is an evolving process as experience and knowledge of cyber-attacks grows. Insureds’ use of the internet is also changing, causing cyber-risk accumulation to change rapidly over time in a way that other perils do not.”

And that is why the lack of time-tested actuarial tables can cause disaster, says Lloyds. “Traditional insurance risk modelling relies on authoritative information sources such as national or industry data, but there are no equivalent sources for cyber-risk and the data for modelling accumulations must be collected at scale from the internet. This makes data collection, and the regular update of it, key components of building a better understanding of the evolving risk.”

Where the Risk Is Growing

The report points to six significant trends that are causing increased risk of an expensive attack – and therefore, increased liability:

Based on those points, and other factors, Lloyds and Cyence have come up with two primary scenarios that could lead to widespread, and costly, damages. The first – a successful hack of a major cloud service provider, which hosts websites, applications, and data for many companies. The second — a mass vulnerability attack that affects many client systems. One could argue that some of the recent ransomware attacks fit into that scenario.

The “Counting the Cost” report makes for some depressing reading. Here are three of the key findings, quoted verbatim. Read the 56-page report to dig deeply into the scenarios, and the damages.

Read the 56-page report to dig deeply into the scenarios, and the damages. You may not sleep well afterwards.