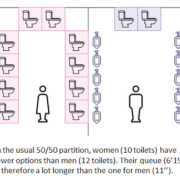 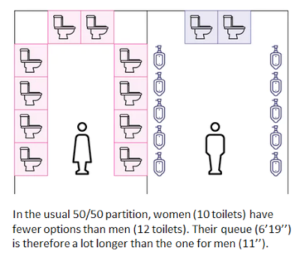 People Queue Magazine has a fascinating new article, “No more queuing at the ladies’ room.” You’ll want to read the whole thing, because it has some fascinating mathematics (this is a scientific article, not a sociological one). Here’s a teaser:

Although it’s a well-documented fact that women have to wait longer at the bathroom stall, so far the mathematical perspective seems to be lacking in literature. This is in spite of the decennia-long existence of the field of queuing theory, which has traditionally been applied most to problems of technology and decent people, rather than to such inescapable habits as the act of excreting.

Nevertheless, mathematics is what you need to analyze queues because of the inherent random nature of queuing phenomena, turning simple lines of people into complex nonlinear systems with numerous parameters, whereby a small deviation can lead to excessive additional waiting. This is as opposed to good old linear systems, which see linear changes of parameters translated in proportional variations at their output.

Nonlinear systems are common in everyday life and nature. A virus for example will result in a pandemic much faster if it is just slightly more infectious. And just a few extra cars make for a traffic jam appearing out of thin air. Similarly, toilet queues, or any queue for that matter, pose nonlinear problems in which the fragile balance between capacity and demand can be disrupted by subtle tweaks.

A first factor explaining why women wait longer is that the net number of toilets for women is smaller than that for men. The toilet sections for men and women are often of equal size, as is the surface dedicated to each of them. What appears to be “fair” at first sight, is quite unreasonable knowing that a toilet cabin inevitably takes up more space than a urinal. Overall, an average toilet area can accommodate 20 to 30% more toilets for men (urinals + cabins) than for women.

Read the whole article — and there’s no waiting, whether you are male or female.