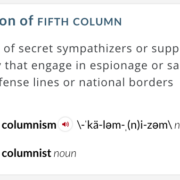 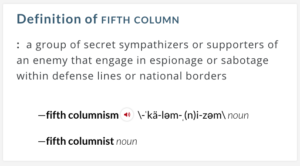 I can’t trust the Internet of Things. Neither can you. There are too many players and too many suppliers of the technology that can introduce vulnerabilities in our homes, our networks – or elsewhere. It’s dangerous, my friends. Quite dangerous. In fact, it can be thought of as a sort of Fifth Column, but not in the way many of us expected.

Merriam-Webster defines a Fifth Column as “a group of secret sympathizers or supporters of an enemy that engage in espionage or sabotage within defense lines or national borders.” In today’s politics, there’s lot of talk about secret sympathizers sneaking across national borders, such as terrorists posing as students or refugees. Such “bad actors” are generally part of an organization, recruited by state actors, and embedded into enemy countries for long-term penetration of society.

There have been many real-life Fifth Column activists in recent global history. Think about Kim Philby and Anthony Blunt, part of the “Cambridge Five” who worked for spy agencies in the United Kingdom in post-World War II era; but who themselves turned out to be double agents working for the Soviet Union. Fiction too, is replete with Fifth Column spies. They’re everywhere in James Bond movies and John le Carré novels.

Am I too paranoid?

Let’s bring our paranoia (or at least, my paranoia) to the Internet of Things, and start by way of the late 1990s and early 2000s. I remember quite clearly the introduction of telco and network routers by Huawei, and concerns that the Chinese government may have embedded software into those routers in order to surreptitiously listen to telecom networks and network traffic, to steal intellectual property, or to do other mischief like disable networks in the event of a conflict. (This was before the term “cyberwarfare” was widely used.)

Recall that Huawei was founded by a former engineer in the Chinese People’s Liberation Army. The company was heavily supported by Beijing. Also there were lawsuits alleging that Huawei infringed on Cisco’s intellectual property – i.e., stole its source code. Thus, there was lots of concern surrounding the company and its products.

Read my full story about this, published in Pipeline Magazine, “The Surprising and Dangerous Fifth Column Hiding Within the Internet of Things.”

Don’t trust Facebook to keep your secrets
Scroll to top