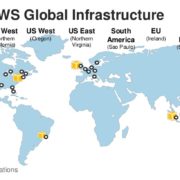 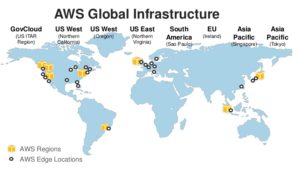 You keep reading the same three names over and over again. Amazon Web Services. Google Cloud Platform. Microsoft Windows Azure. For the past several years, that’s been the top tier, with a wide gap between them and everyone else. Well, there’s a fourth player, the IBM cloud, with their SoftLayer acquisition. But still, it’s AWS in the lead when it comes to Infrastructure-as-a-Service (IaaS) and Platform-as-a-Service (PaaS), with many estimates showing about a 37-40% market share in early 2017. In second place, Azure, at around 28-31%. Third, place, Google at around 16-18%. Fourth place, IBM SoftLayer, at 3-5%.

Add that all up, and you get the big four (let’s count IBM) at between 84% and 94%. That doesn’t leave much room for everyone else, including companies like Rackspace, and all the cloud initiatives launched by major computer companies like Alibaba, Dell, HP Enterprise, Oracle, and all the telcos around the world.

Of course, IaaS and PaaS can’t account for all the cloud activity. In the Software-as-a-Service realm, companies like Salesforce.com and Oracle operate their own clouds, which are huge. And then there are the private clouds, operated by the likes of Apple and Facebook, which are immense, with data centers all around the world.

Still, it’s clear that when it comes to the public cloud, there are very few choices. That covers the clouds telcos want to monetize, and enterprises need for hybrid clouds or full migrations,  You can go with the big winner, which is Amazon. You can look to Azure (which is appealing, of course, to Microsoft shops) or Google. And then you can look at everyone else, including IBM SoftLayer, Rackspace, and, well, everyone else.

Remember when computer makers were touting “Intel Inside”? In today’s world, many SaaS providers are basing their platforms on Amazon, Azure or Google. And many IaaS and PaaS players are doing the same —except in many cases, they’re not advertising it. Unlike many of the smaller PC companies, who wanted to hitch their star to Intel’s huge advertising budget, cloud software companies want to build out their own brands. In the international space, they also don’t want to be seen as fronting U.S.-based technology providers, but rather, want to appeal as a local option.

Speaking of international, the dominance of the IaaS/PaaS market by three U.S. companies can create a bit of a conundrum for global tech providers. Many governments and global businesses are leery of letting their data touch U.S. servers, and in some cases, even if the Amazon/Azure/Google data center is based in Europe or Asia, there are legal minefields regarding U.S. courts and surveillance. Not only that, but across the globe, privacy laws are increasingly strict about where consumer information may be stored.

What does this add up to? Probably not much in the long run. There’s no reason to expect that the lineup of Amazon, Azure and Google will change much over the next year or two, or that they will lose market share to smaller players. In fact, to the contrary: The big players are getting bigger at the expense of the niche offerings. According to a recent report from Synergy Research Group:

New Q4 data from Synergy Research Group shows that Amazon Web Services (AWS) is maintaining its dominant share of the burgeoning public cloud services market at over 40%, while the three main chasing cloud providers – Microsoft, Google and IBM – are gaining ground but at the expense of smaller players in the market. In aggregate the three have increased their worldwide market share by almost five percentage points over the last year and together now account for 23% of the total public IaaS and PaaS market, helped by particularly strong growth at Microsoft and Google.

An intimate take on cybersecurity: Yes, medical devices can be hacked and c...