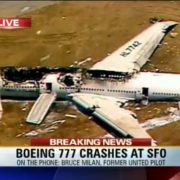 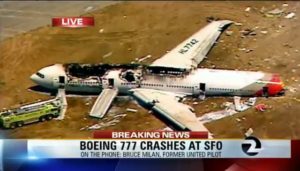 The flickering television screen caught our eye as we sat sipping cold drinks at a Burger King in Parker, Arizona. Miles deep in the Sonoran Desert, between Twentynine Palms and Scottsdale, we were tired and thirsty – but our family couldn’t escape the horrific photographs of the Asiana Airlines 777 crash at SFO.

In those first few moments, it was too soon to know the fate of the aircraft’s crew and passengers, but seeing the shocking images, we assumed that nobody could have survived. Fortunately, that early assessment was swiftly proven wrong. Still, three young people, Ye Meng Yuan, Wang Lin Jia and Liu Yipeng, lost their lives, and dozens more were injured.

Only a couple of days later, a small plane crashed at Soldotna Airport, a small field in southern Alaska, killing all 10 passengers and crew. A train derailed in Lac-Mégantic, Quebec, with at least five people dead.

Death can strike at any time, whether by accident, disease, crime, or war. Nearly 30 years ago, a dear friend of mine was jogging in Orono, Maine, when she was hit by a bicycle. She was pronounced dead at the hospital. You can imagine the shock.

Also in Maine, over the most recent Fourth of July weekend, another shocking death. According to my hometown paper, the Bangor Daily News, “…the fatal accident happened during the parade at Main and Water Streets. An officer on the scene reported that a man operating a green tractor turned right onto Water Street and was struck from behind by a vintage Bangor Hose 5 Fire Museum fire truck.” Death doesn’t get more random than that.

In early July, senseless tragedy struck Camp Tawonga, the Jewish camp near Yosemite National Park, when a tree fell onto a campfire circle. Four camp counselors were injured; a fifth, Annais Rittenberg, lost her life. She was a 21-year-old student at U.C. Santa Cruz.

Take a moment and think about family, friends, colleagues, and neighbors taken far, far too soon, ravaged by physical or mental illness, or who had the simple misfortune to be in the wrong place at the wrong time.

As it says in Proverbs, “Zecher tzadik livracha,” “The memory of the righteous shall be for a blessing.” At these times, there is no better source of comfort than the loving embrace of the synagogue – and of our clergy and community.

Remember the unbelievable San Bruno gas explosion in 2010 − only a few blocks from our own house. In that tragedy, 58 individuals were injured and seven were killed, including one of our son’s closest friends, Will Bullis, and Will’s father and grandmother.

The PTS clergy, professional staff, lay leadership, and entire congregation worked tirelessly to ensure that every congregant was alive and accounted for, and to see how we could heal that shattered neighborhood, those broken families.

Here at Peninsula Temple Sholom, Rabbi Feder, Rabbi Stern, and Cantor Reich are a comforting presence, whether you have suddenly lost a loved one or are dazed after a disaster like the 777 crash or the San Bruno gas explosion. The professional staff, led by Sandy Silverstein, make arrangements as seamless as possible. The lay-led Caring Community team, chaired by Janice Katz and Wendie Fetterman, are always there to help.

As we head into the High Holy Day season, consider the many reasons to participate in the Peninsula Temple Sholom community. Providing a Jewish education for our children, yes. Adult learning and Shabbat worship and festival observances, of course. Celebrating a simchah, obviously. Coming together in difficult times — always.

Without your generosity, the canopy of peace over Peninsula Temple Sholom would not be possible. We appreciate your financial support for our Sukkat Shalom. And may the memory of our departed friends and loved ones forever be a blessing.

Cloud failures: It’s not if, it’s when