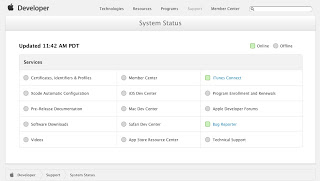 Apple is sporting an nasty black eye, and the shiner isn’t only because iPad sales are slipping – with a 14% year-on-year decline reported. This time, it’s because QoS on the company’s cloud servers is ugly, ugly, ugly.

As of my writing (on Thursday, July 25), Apple’s developer portal has been offline for days. As you can see on the dashboard, just about everything is down. If you go to a dev center, you see this message:

We apologize for the significant inconvenience caused by our developer website downtime. We’ve been working around the clock to overhaul our developer systems, update our server software, and rebuild our entire database. While we complete the work to bring our systems back online, we want to share the latest with you.

We plan to roll out our updated systems, starting with Certificates, Identifiers & Profiles, Apple Developer Forums, Bug Reporter, pre-release developer libraries, and videos first. Next, we will restore software downloads, so that the latest betas of iOS 7, Xcode 5, and OS X Mavericks will once again be available to program members. We’ll then bring the remaining systems online. To keep you up to date on our progress, we’ve created a status page to display the availability of our systems.

As you may have read elsewhere, the reason for the outage is apparently a researcher found a massive security hole in the App dev center system. To prevent the flaw from being exploited, Apple took the entire system down – on July 18. That’s right, it’s been over a week.

And then, today, July 25, there are reports that the authentication server needed to set up new iPhone accounts is offline. Apple’s IT department certainly isn’t looking too savvy right now – and perhaps this points to bigger challenges within the company’s spending priorities.

However, before anyone piles onto Apple, bear in mind that service outages are not uncommon, especially in the cloud. Certainly, they are not new; I’ve written about them before, such as in 2008’s “When the cloud was good, it was very very good, but when it was bad, it was horrid” and 2011’s “Skynet didn’t take down Amazon Web Services.”

Cloud failure is not a matter of if. It’s a matter of when. When huge corporations like Amazon and Apple can suffer these sorts of outages, anyone can, no matter how big.

What’s the game plan? Do you have a fail-over strategy to spool up a backup provider? Do you have messaging ready for your customers and partners? Alternatives to suggest?

I have no idea how much money Apple is losing due to these outages – or how much its developer partners and customers are affected. Apple, however, is big enough to handle the hit. How about you?

The developer is king

May their memory be a blessing
Scroll to top