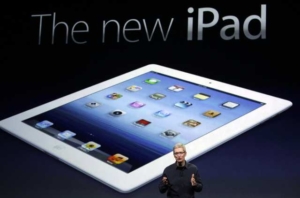 Apple CEO Tim Cook introduces the new iPad during an event in San Francisco, Wednesday, March 7, 2012. The new iPad features a sharper screen and a faster processor. Apple says the new display will be even sharper than the high-definition television set in the living room. (AP Photo/Paul Sakuma)

Two important products were introduced this week. One was the new iPad from Apple. The other was SQL Server 2012 from Microsoft.

With all the coverage of Apple’s third-generation tablet, everything else in the tech industry ground to a halt. Not just the tech industry. Heck, even general interest media sent out alerts:

That alert sums up Apple’s news, so let’s talk about SQL Server 2012. Large-scale enterprise databases – like SQL Server, DB2 or Oracle – are the least-talked about parts of IT infrastructure. They’re big, they’re fast, they’re essential to any data center or for any n-tiered application.

Despite all the talk about clouds – and Database-as-a-Service – performance and bandwidth dictate that database servers must rename close to their application servers. For truly large projects, those are staying entirely or mainly on-premises for years to come. Yet SQL Server 2012 anticipates the move to the cloud, and makes it feasible to have applications that span both on-premises data centers and cloud-based servers. That’s important.

SQL Server 2012 isn’t really news, of course. Customers have been using it for months – March 6 only saw the official “release to manufacturing” of the bits. Most of the details came out last October, when Microsoft started its previews, and focused on Big Data and integration with Hadoop.

The list of other changes – beyond the Hadoop, Big Data and cloud features – shows an incremental upgrade. Better high-availability functions with multiple subject failover clusters and more flexible failover policies. Programmability enhancements with statistical semantic search, property-scoped full-text search and customizable proximity search, ad-hoc query paging, circular arc segment support for spatial types, and support for sequence objects. Some needed scalability and performance enhancements for data warehouses, and support for 15,000 partitions (up from 1,000 partitions). And improvements to permissions and role-based management, as well as better auditability.

Is SQL Server 2012 a must-have upgrade? The answer is the same as with the new iPad: Only if you need the new features right now:

In the iPad 3 era, pay attention to the Pixels-Per-Inch
Scroll to top