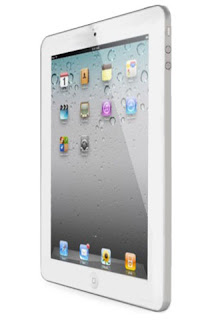 Earlier this week, Apple announced the iPad 1.1, the long-awaited successor to its magical tablet.

The iPad 1.1 is very similar to the original iPad (which I’ll call the “iPad 1”), except that it’s available in white. It’s a bit thinner. It’s a bit lighter. It has a dual-core processor (Apple says 2x faster), a better graphics chip (Apple says 9x faster) and more memory.

Oh, it has a couple of cameras, a rear-facing one for shooting photos and videos, and a front-facing camera for doing video chats. The iPad 1.1 comes in two versions, one for GSM wireless networks, the other for CDMA networks.

Apple calls this device the iPad 2. However, it’s a minor incremental upgrade, and should really have been called iPad 1.1 or maybe iPad 1.5. Beyond the cameras, there’s nothing especially new here. Same screen. Same range of installed storage, from 16GB to 64GB. Very similar pricing, starting at US$499. Minor tweaks to the operating system to add support for WiFi hotspots, media sharing, and a few other goodies.

Don’t mind my skepticism: I was one of those who preordered the iPad 1 last year, and truly love my tablet. I use my iPad every day. Of course, I also use my iPhone and HTC Evo Android phone every day, so perhaps I’m easily swayed by cool gadgets. Even so, this was one announcement from Cupertino that didn’t impress me much; my credit card stayed firmly planted in my wallet.

My guess – and it’s only a guess – is that Apple released this very incremental upgrade as a competitive reaction. It had to respond to the sudden proliferation of Android tablets like the Viewsonic gTablet or Archos 7 or Motorola Xoom. Offering the iPad 1.1 now offers Apple several benefits:

• It keeps the iPad in the news. Apple is a brilliant marketing company, knows how to stroke the media and sway public opinion.
• It addresses the single biggest area where Android devices had an clear advantage — cameras.
• It let Apple integrate a Verizon-compatible CDMA radio system without reworking the old hardware.
• The dual-core A5 chip and added RAM solves performance issues that prevented some bigger applications from running on the iPad, like iMovie.
• It maintains sales momentum and media attention until the real next-generation device (iPad 3) comes out, perhaps as early as this fall.

That said, let’s turn our thoughts to Android tablets, which will be helped significantly by the newly released Android 3 “Honeycomb.” Personally, I’m thinking about buying the Motorola Xoom — once the WiFi-only version comes out. (I do not need another wireless bill, thank you very much; that’s why I have a Novatel MiFi.)

Yes, gadgets are good, and having lots of tablets drives consumer choice, fuels competitive innovation and lowers pricing. But from the developer perspective, the unfettered explosion in form factors is a worry. What is that going to mean for hardware/software compatibility, third-party apps and building a huge ecosystem?

Apple’s tight control over the its own hardware makes it easy to know that a tablet-oriented iOS application will run on every iPad device, with only rare backward-compatible limitations. Similarly, Microsoft’s WinHEC {} and tight reins over its Windows logo program meant that you can be pretty much assured that any modern Windows application is going to run on any modern Windows device.

Already I have an issue with the Line2 telephone application, It’s “certified” for three Android models – and my HTC Evo isn’t one of them. Sometimes Line2 just doesn’t work well. The developer, Toktumi, says “Voice quality is a known issue on HTC EVO 4G (Sprint) phones.” Have some other Android device? The company says, “If you don’t see your device listed here you can still download Line2 and try it for free however we can’t guarantee performance quality on non-certified phones.”

That frustration may be the future of Android.

Many iPad customers are perfectly contented with the beautifully designed, carefully integrated hardware packages that Apple presents. Android represents the diametric opposite. Android is getting a lot of attention because it offers unfettered creativity and competitive differentiation. Let’s see what happens if that differentiation leads to fragmentation. If that happens, Apple’s carefully curated walled garden may begin to look more attractive.

My recommendation for learning: Pair Conferencing

Java, the Smithsonian, and Android Honeycomb
Scroll to top