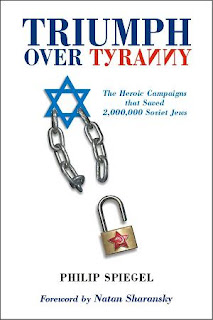 My friend Phil Spiegel has written a wonderful book, entitled “Triumph Over Tyranny: The Heroic Campaigns That Saved 2,000,000 Soviet Jews.”

The hardcover will come out on Oct. 10. You can pre-order the book from Amazon.com right now. In the meantime, you can check out Phil’s Web site for the book. As he writes,

My book, TRIUMPH OVER TYRANNY: The Heroic Campaigns that Saved 2,000,000 Soviet Jews, is now being printed and will be released by Devora Publishing of Jerusalem and New York on October 10, 2008. I invite you all to visit the book’s new website, www.triumphovertyranny.com.

The site will enable you to:

• See the book’s cover and a list of its chapters
• Read an overview of the book, my bio, and Natan Sharansky’s foreword
• Check out reviews of the book
• Find out where and when I’m doing book signing events
• Order signed copies of the book
• Link to websites from organizations who support Jews from the FSU
• Learn about the “Unsung Hero of the Month”

Please join me in supporting Phil’s diligent scholarship. “Triumph of Tyranny” has been years in the making, and I hope you’ll agree that he has done a tremendous job of documenting important history and genuine heroism.

Some more about Phil:

Philip Spiegel and his wife, Carolyn Kommel Spiegel, traveled to the Soviet Union in 1985 and 1987 as participants in the Moscow Marathon. They also visited and befriended refuseniks in Russia,Armenia and Azerbaijan. When they returned to California the Spiegels gave numerous talks about their findings in the Soviet Union and organized letter writing campaigns supporting resfuseniks and prisoners of conscience.

From 1985 to 1995 the Spiegels served on the Board of Directors of the Bay Area Council for Soviet Jews. During this time the author was chairman of the Social Action Committee of Congregation Kol Emeth in Palo Alto and represented the congregation on the local Jewish Community Relations Council.

During his professional career in the electronics industry Spiegel authored technical papers, marketing materials and training courses. In 2000 he wrote and published Remembering Ottynia, a 64-page book about his parents’ hometown in Ukraine. Copies of the book were donated to several Holocaust museums in the United States and Israel and the book was accepted by Yad Vashem as a Yizkor (memorial) book.

Since 2002, Spiegel has researched the history of the international Soviet Jewry movement and interviewed over 200 activists, political leaders, former refuseniks and prisoners of conscience. He has presented several lectures on his research and in 2006 he developed and taught “The Journey of Soviet Jewry,” a five-session course for Lehrhaus Judaiaca, the Adult School for Jewish Studies in the San Francisco Bay Area.