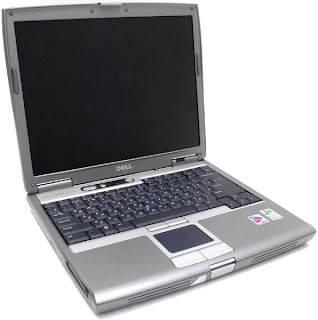 I fought the hackers, and the hackers won. Here’s the story: One of our employees had a nice Dell Latitude D610 laptop, and it was totally messed up – running super-slow, lots of crashes, adware popups in the browser, and so-on.

Because this was a huge productivity problem for a key employee, we solved it by buying her a new laptop this past summer. But what about the old laptop? It ended up on a shelf in my office. It’s a good machine: 1.7GHz Pentium M processor, 1400×1050 14-inch screen, 60GB hard drive, lots of RAM, DVD player, two batteries. Physically, it’s in great shape. It’s a shame not to put that laptop back into service.

It so happened that I currently need a Windows laptop for a specific project. I pulled the Latitude off the shelf yesterday morning, scurried around to find its power supply brick (which was buried) and decided to clean it up. This shouldn’t take long, I thought.

Big mistake, at least in terms of it being easy. After many hours of scrubbing, uninstalling software (the previous user had installed every free browser toolbar known to humanity) and running Microsoft Update a few dozen times, the machine was working. Sort of. It was still incredibly slow, and the browser still was being hijacked by adware.

I ran an anti-virus check, and it discovered oodles of infestations. Dozens. Most of which the Sophos software could delete. However, there were four that it couldn’t destroy. Two of them were instances of the Virtum-Gen trojan. The other two were spyware, called ClickStream and Virtumondo. As the saying goes, I tried scrubbing, I tried soaking, nothing seemed to help.

To make a long story short, after fighting with the malware last night for several hours, I’d had enough. It’s one thing to have a “project” laptop on my desk, and keep running Microsoft Update and rebooting while I do other work on my own machine. That’s not hard. It’s another to focus intensively on removing spyware and viruses. That takes a lot of time, patience and concentration, none of which this project could justify.

So, this morning I blew away the Latitude’s hard drive and installed a clean copy of Windows XP Professional. I hadn’t wanted to do this, since there were applications on the Latitude that I wanted to keep. However, at some point you just have to admit defeat and cut your losses.

The installation process for Win XP Pro itself was interminable. It’s been a while since I last did this, and I’d forgotten how long it takes. The installation disc I had was pre-Service Pack level, and it’s taken many hours to install Windows, add the service packs, and apply all the updates and security patches. But now, at least I have a cleanly configured Windows laptop that’s not infected, and runs fast, fast, fast.

I’m glad I don’t fix PCs for a living.

PR pitches that define my publication – badlyNo, I will not fix your computer!
Scroll to top