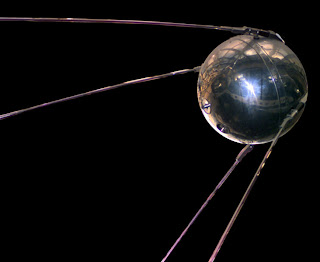 Today’s vibrant, exciting advances in technology — and in particular, the computer-related careers of many developers in our 40s and 50s — can be directly tied back to an event 50 years ago: the launch of Sputnik 1, the world’s first artificial satellite.

It’s long forgotten now, but 1957-1958 was the International Geophysical Year. American scientists talked about launching a satellite, but the Soviet Union beat them to the punch.

The surprise launch, on Oct. 4, 1957, threw the U.S. into a tizzy — resulting in the launch of the American Explorer satellite on Jan. 31, 1958, and then the creation of NASA a few months later.

I certainly was. I wanted to be an astronaut, like so many young people growing up in that era. Early dreams of space led me into a more realistic passion for astronomy, which morphed in college into mathematics, and then computer science. Space, you see, was all about computers, whether it was 2001’s HAL or the U.S.S. Enterprise’s mainframe.

It would be a mistake to give too much credit to Sputnik — it didn’t spark the computer revolution or the art of software development. That was already well under way when the satellite went up—Fortran was designed in 1954, ALGOL was standardized in 1958, and COBOL came out in 1959.

However, I believe it’s not a stretch to credit Sputnik for the creation of many of today’s computer scientists and software engineers, whose childhood and education were profoundly influenced by the space race.

Another birthday that we should celebrate today: JUnit was launched 10 years ago. The open source Java tool revolutionized software development by driving the concept of unit testing deep into our psyche, and laid the foundation of modern agile processes.

Today, many of us think in test cases, and consider testing to be a critically important aspect of development. We owe a great deal to Erich Gamma and Kent Beck. Good job, guys!

Beauty IS the Geek

Saving big with a Brita 4-pack
Scroll to top