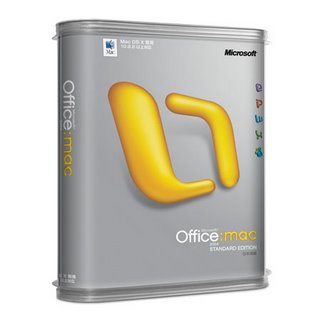 It was bound to happen: Someone sent a BZ Media employee a document in the new .docx format. That’s one of the Open Office XML formats that Microsoft introduced with Office 2007. Given that Office 2007 just came out, I didn’t expect this to happen so soon.

But the sender was a Microsoft employee, so I shouldn’t be surprised.

BZ Media is a mixed Windows and Mac shop. Our Windows XP users are on Office 2003; our Mac users are on Office 2004. We, like many businesses, have not budgeted to upgrade Office this year. (We’re kinda dreading what will happen when we buy a new PC that comes with Windows Vista and Office 2007 on it, but that’s another story.)

So, to continue our tale, a Windows user running Office 2003 received a .docx file. Office 2003, recognizing the file extension, prompted the user to download and install the Microsoft Office Compatibility Pack from Microsoft. This software teaches Office 2003 how to use the new file formats. The employee, following our IT policies, asked if this was legitimate and okay – and that’s when I entered the story.

As you may have seen from previous posts, I’m primarily a Mac user who runs Office 2004. After approving installation of the compatibility pack, I asked the employee to send me the file to play with. Guess what?

No surprise: Office 2004 for the Mac doesn’t natively understand .docx.

Big surprise: Microsoft hasn’t released file-format converters for its own current product: Office 2004 for the Mac.

I’m not the only person who thinks so. Tim Gaden rants about this nicely in a blog entry called “The lock-out begins for Office Mac users.”

What does Microsoft have to say? A member of the company’s Macintosh Business Unit, posting on their Mac Mojo blog in early December, advises, “For now, we recommend that Mac users advise their friends and colleagues using Office 2007 to save their documents as a “Word/Excel/PowerPoint 97-2003 Document” (.doc, .xls, .ppt) to ensure the documents can be shared across platforms.”

Why the delay? The blogger writes, “We had to wait until Office 2007 bits and the new file format itself were locked down. During this time, we spent the last year and a half prepping and planning for our own development of file format converters for Office for Mac.”

What about timing? “We are running on target and expect to release a free public beta version of the file format converters in Spring 2007, with final converters available six to eight weeks after we launch our next version of Office for Mac (which, as previously reported, will be available 6-8 months after general availability of Win Office.)”

In other words, Microsoft won’t release the converters for Office 2004 for the Mac until six-to-eight weeks after it ships Office 2008 for the Mac much later this year.

How can Microsoft expect outside developers to be able to implement these new Office Open XML formats, when they can’t even do that themselves in a timely matter? A six to eight month delay, after having more than a year to prepare? Completely, completely, completely unacceptable.

Digital Rights Mis-Management We’re working on it!
Scroll to top