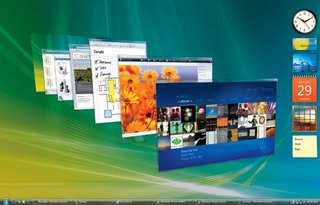 1. Windows Presentation Foundation and Aero user interface. The new GUI is clean and slick, and when run on the right hardware so that it can use its “glass” effects, is much more visually appealing than Aqua, the GUI in Mac OS X 10.4… though, frankly, Aero is not as intuitive to use as Aqua.

2. Windows Communication Foundation. This new messaging subsystem makes it easier for developers to create .NET applications that use Web services. The WCF plumbing takes care of a lot of middleware-dependent issues.

3. Windows Workflow Foundation. This subsystem, which includes a workflow runtime engine, offers tremendous potential for creating complex applications and mashups. To be honest, I’m not sure how useful this will be on the desktop, but it’s an impressive concept and a well-considered implementation.

4. Windows Mail. Outlook Express was tired, and Windows Mail is wired. However, given the every-improving quality of Web-based mail systems, it’s unclear how useful this will be for the average consumer or even office worker.

5. Built-in support for x64. New computers, such as those running Intel’s Core 2 Duo or Xeon processors, or AMD’s Athlon 64 or Opteron processors, can run 64-bit operating systems, and most versions of Windows Vista come with both 32-bit and 64-bit kernels in the box.

6. ReadyBoost. This feature uses Flash memory (like in a USB flash drive) as a memory cache. Remember, Flash memory is faster than a rotating disk – and there’s virtually no seek time. This is the one feature that I wish I had on the Mac right now.

7. Built-in support for ink. Forget about the separate Windows XP Tablet PC Edition 2005… Windows Vista has all the tablet bits built in, and actually goes much farther by supporting new gestures for command-and-control. (One of my pending projects is to install Windows Vista onto my Fujitsu T4010 tablet.)