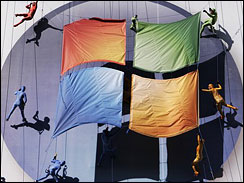 That’s the headline of a CBS News story about the launch of Windows Vista today. Oooh, the headline writers at The Associated Press must have worked overtime to come up with that one.

No, this isn’t a knock on Microsoft. This is a knock on the AP (this is their picture, too), who have apparently forgotten the difference between reporting and shilling, and on CBS News, which is happy to reprint fluff from the AP without thinking about it.

The second paragraph of the story revealed the depth of this puff piece:

“This ‘wow’ thing is a great way of describing what we’ve got here,” Microsoft’s chairman told The Associated Press on Monday as the software maker began a slate of splashy events in New York. “There are chances for ‘wows’ all over the product.”

Do I smell a Pulitzer? Sheeesh.

>> Update 1/30: CBS News changed the story’s headline to “Vista Makes Its Debut,” and added a lot more detail and commentary. Yesterday, it was purely an AP story, but now CBS News says that the AP “contributed to this report.”