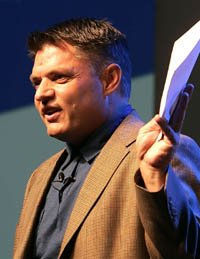 The SCO Group released its earnings for the quarter that ended Oct. 31, 2006. To no surprise, they’re worse than ever, as CEO Darl McBride (pictured) continues to drive the company into the ground.

Now, you might think that this was due to the brain-dead IBM/Novell lawsuit. You’d be wrong. According to the financials, the costs of the lawsuit were only $2,220,000 for the fourth quarter, down from $3,380,000 for the same quarter in the previous year. That’s right — the losses from bad operations swamp the losses from bad lawsuits. Even without the lawsuit, they’d still be hemorrhaging money.

Is there hope that the company’s fortunes will improve? Not if McBride’s comment is any indication. “We remain committed to our UNIX business, introducing new mobile services to the marketplace and defending our intellectual property through the legal system,” he wrote.

How much longer will SCO survive? The best guess: Not long.

PS: Did you know that Darl McBride has his own Web site? It hasn’t been updated for a while, though.