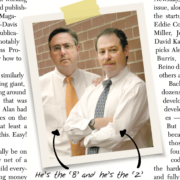 February 23, 2000 — the debut issue of SD Times hit the stands and changed my world. Launched as a printed semi-monthly newspaper in tabloid size, SD Times grew into the world’s leading publication for software development managers.

Ted Bahr and I formed BZ Media in mid-1999. SD Times was the first of our many publications, conferences, and websites, all B2B for the technology industry. Today, SD Times flourishes as part of D2 Emerge, and we couldn’t be more proud to see our beloved SD Times continue to serve this important audience.

Let’s look back. David Rubinstein — who started out as executive editor of SD Times and is now co-owner of D2 Emerge and editor-in-chief of the magazine — put out a great 20th anniversary issue. (The other D is Dave Lyman.)

The special issue includes essays from me (page 18) and from Ted (page 12). Dave wrote a remembrance column (page 46) and art director Mara Leonardi shares some of her favorite SD Times covers and images (page 20).

Meanwhile, my favorite part of the special 20th anniversary issues are the old photos.

Read the top CISO priorities for 2020