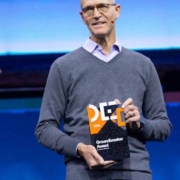 Doug Cutting stands head-and-shoulders above most developers I’ve met—figuratively, as well as literally. As one of the founders of the Hadoop open source project, which allows many Big Data projects to scale to handle huge problems and immense quantities of data, Cutting is revered. Plus, Doug Cutting is tall. Very tall. (Lots taller than I am.)

“Six-foot-eight, or 2 meters 3 centimeters, for the record,” Cutting volunteers when we meet.

In the software industry, Cutting looms large for two major open source successes, proof that innovation lightning sometimes strikes twice. Hadoop, managed by the Apache Software Foundation, is at its heart a framework and file system that manages distributed computing—that is, it allows many computers to work together in a cluster to solve hard problems.

Hadoop provided the initial foundation for many companies’ big data efforts. The software let them pull in data from multiple sources for analysis using clusters of dozens, or hundreds, of servers. The other project, also managed by Apache, is Lucene, a Java library that lets programmers build fast text indexing and searching into their applications.

In his day job, Cutting serves as the chief architect for Cloudera, one of the largest open source software companies. He also serves as an evangelist for the open source movement, inspiring contributions to Hadoop and Lucene and also many other projects.

Cutting was recently honored with a Groundbreaker Award, presented at Oracle Code One in San Francisco. He talked to me about collaborating on open source software, creating a fulfilling career in software, understanding how technology affects society, and the meaning of the word “Hadoop.” Read Cutting’s thoughts about everything from building a career in open source to the meaning of data science in my article for Forbes, “Hadoop Pioneer Says Developers Should Build Open Source Into Their Career Plans.”

Embed AI into applications for the biggest impact

Charles Nutter: a Java programmer blown away by Ruby
Scroll to top