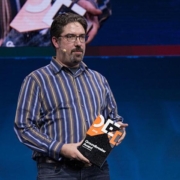 Charles Nutter remembers when, working as a Java architect, he attended a conference and saw the Ruby programming language for the first time. And he was blown away. “I was just stunned that I understood every piece of code, every example, without knowing the language at all. It was super easy for me to understand the code.”

As a Java developer, Nutter began looking for an existing way to run Ruby within a Java runtime environment, specifically a Java virtual machine (JVM). This would let Ruby programs run on any hardware or software platform supported by a JVM, and would facilitate writing polyglot applications that used some Java and some Ruby, with developers free to choose whichever language was best for a particular task.

Nutter found the existing Ruby-on-JVM project, JRuby. However, “it had not been moving forward very quickly. It had been kind of stalled out for some years.” So, he became involved, helping drive support for a popular web application framework, Ruby on Rails, to run within a JVM.

Want to be like Nutter someday? His career advice is direct: Contribute to an open source community, even if it’s a little daunting, and even if some people in that community are, well, rude to newcomers.

For his successful coleadership of JRuby during more than a decade, and for his broader leadership in the software industry, Nutter was recently honored with a Groundbreaker Award. The award was presented at Oracle Code One in San Francisco, where we had a long chat. Read what we talked about in my article for Forbes, “A Java Developer Walks Into A Ruby Conference: Charles Nutter’s Open Source Journey.”

Doug Cutter is the tall guy in Hadoop and Big Data