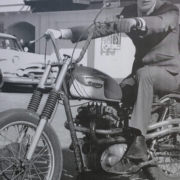 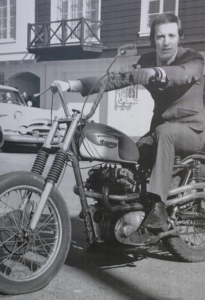 Can you believe that Cantor Barry Reich has been with Peninsula Temple Sholom for 51 years? That’s an incredible tenure. He began at the Burlingame, Calif., synagogue as a liturgical singer who showed up on a motorcycle. He retires — well, becomes Cantor Emeritus – at the end of this month.

Barry and I have done lots of great projects together. Not only that, he oversaw the Bar Mitzvah of my son Michael, who also played in the Cantor’s band. As a recent story in the J Weekly writes,

Reich, 71, has the kind of background most cantors could only dream of. He represents the fifth generation of cantors in his family, raised in L.A.’s old Jewish neighborhood of Boyle Heights. Reich was a yeshiva kid until his father, Israel Reich, switched to the Conservative movement. The family moved around for a few years, and Barry Reich got his cantorial start as a child singing in overflow services at his father’s synagogue in Miami.

But by senior year in high school, the Reiches were in San Francisco, where Israel served as cantor at Congregation Beth Sholom. Barry was still a music student of 17 when he stepped in as a temporary cantor at PTS.

What happens next? Says, the J,

With retirement on the horizon, Reich has a few ideas for how he’ll be spending his time, although he’s keeping his options open. He plans to publish some of the choral music he’s written through the years, which means recording it as well, and he’s toying with the notion of working with Jewish summer camps. And his official title will be cantor emeritus as of July 1. But one thing he won’t be doing in the fall is singing on the bimah. “For the first time in 51 years, I’m going to take the High Holidays off,” he said.