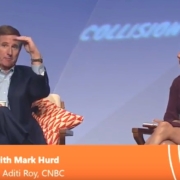 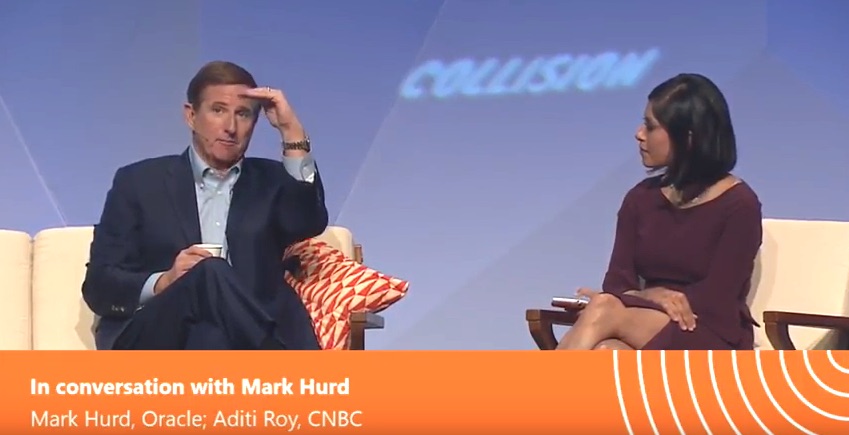 Oracle CEO Mark Hurd is known as an avid tennis fan and supporter of the sport’s development, having played in college at Baylor University. At the Collision Conference last week in New Orleans, Hurd discussed the similar challenges facing tennis players and top corporate executives.

“I like this sport because tennis teaches that you’re out there by yourself,” said Hurd, who was interviewed on stage by CNBC reporter Aditi Roy. “Tennis is like being CEO: You can’t call time out, you can’t bring in a substitute,” Hurd said. “Tennis is a space where you have to go out every day, rain or shine, and you’ve got to perform. It’s just like the business world.”

Performance returned to the center of the conversation when Roy asked about Oracle’s acquisition strategy. Hurd noted that Oracle’s leadership team gives intense scrutiny to acquisitions of any size. “We don’t go out of our way to spend money — it’s our shareholder’s money,” he said. “We also think about dividends and buying stock back.”

When it comes to mergers and acquisitions, Oracle is driven by three top criteria, Hurd said. “First, the company has to fit strategically with where we are going,” he said. “Second, it has to make fiscal sense. And third, we have to be able to effectively run the acquisition.”

Hurd emphasized that he’s focused on the future, not a company’s past performance. “We are looking for companies that will be part of things 5 or 10 years from now, not 5 or 10 years ago,” he said. “We want to move forward, in platforms and applications.”

To a large extent, that future includes artificial intelligence. Hurd was quick to say, “I’m not looking for someone to say, ‘I have an AI solution in the cloud, come to me.’” Rather, Oracle wants to be able to integrate AI directly into its applications, in a way that gives customers clear business returns.

He used the example of employee recruitment. “We recruit 2,000 college students today. It used to be done manually, but now we use machine learning and algorithms to figure out where to source people.” Not only does the AI help find potential employees, but it can help evaluate whether the person would be successful at Oracle. “We could never have done that before,” Hurd added.

Read more about what Hurd said at Collision, including his advice for aspiring CEOs, in my story for Forbes, “Mark Hurd On The Perfect Sport For CEOs — And Other Leadership Insights.”

You can also watch the 20-minute entire interview here.

Five things you need to know about microservices