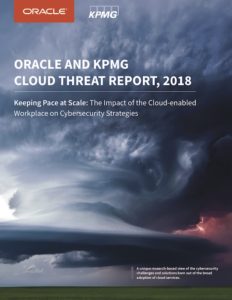 Is the cloud ready for sensitive data? You bet it is. Some 90% of businesses in a new survey say that at least half of their cloud-based data is indeed sensitive, the kind that cybercriminals would love to get their hands on.

The migration to the cloud can’t come soon enough. About two-thirds of companies in the study say at least one cybersecurity incident has disrupted their operations within the past two years, and 80% say they’re concerned about the threat that cybercriminals pose to their data.

The good news is that 62% of organizations consider the security of cloud-based enterprise applications to be better than the security of their on-premises applications. Another 21% consider it as good. The caveat: Companies must be proactive about their cloud-based data and can’t naively assume that “someone else” is taking care of that security.

Those insights come from a brand-new threat report, the first ever jointly conducted by Oracle and KPMG. The “Oracle and KPMG Cloud Threat Report 2018,” to be released this month at the RSA Conference, fills a unique niche among the vast number of existing threat and security reports, including the well-respected Verizon Data Breach Investigations Report produced annually since 2008.

The difference is the Cloud Threat Report’s emphasis on hybrid cloud, and on organizations lifting and shifting workloads and data into the cloud. “In the threat landscape, you have a wide variety of reports around infrastructure, threat analytics, malware, penetrations, data breaches, and patch management,” says one of the designers of the study, Greg Jensen, senior principal director of Oracle’s Cloud Security Business. “What’s missing is pulling this all together for the journey to the cloud.”

Indeed, 87% of the 450 businesses surveyed say they have a cloud-first orientation. “That’s the kind of trust these organizations have in cloud-based technology,” Jensen says.

Here are data points that break that idea down into more detail:

Read more, including what cyberattacks say about the “pace gap,” in my essay in Forbes, “Threat Report: Companies Trust Cloud Security.”