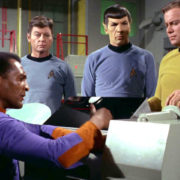 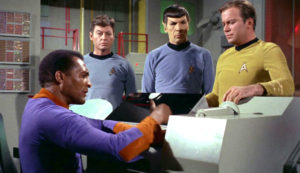 For no particular reason, and in alphabetical order, my favorite episodes from the original Star Trek, aka, The Original Series.

Kirk and the captain of the Gorn ship are told to fight to the death as proxies for a space battle, but neither is happy about it

Appearances aren’t what they seem, and a vicious enemy may only be a lonely alien.

The Devil in the Dark

Not only is there a neat non-humanoid alien, but we get to see Kirk dealing with Federation civilians who aren’t impressed with his authority.

Captain Ahab takes on the white whale, as we get to see another starship and an argument about rank and Starfleet protocol.

We learn about Spock’s family, some of the other important species in the Federation, and what diplomacy is all about.

Let That Be Your Last Battlefield

A parable about race and law-and-order, as black-and-white aliens fight against white-and-black aliens.

We visit the Mirror Universe for the first time, a place that’s frankly a lot more interesting that the regular universe.

The Trouble with Tribbles

The funniest episode of Classic Trek, which is peculiarly meaningful because writer David Gerrold gave my wife one of the tribbles used on the show.

Can an AI-based computer operate a self-driving Enterprise? The anti-Elon Musk, Dr. Daystrom (shown), thinks so.