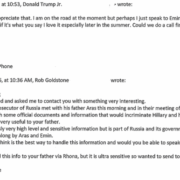 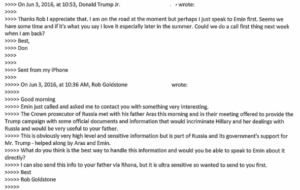 This is what Daffy Duck would describe as “dethpicable.” Absolutely deplorable.

We can now read emails exchanged last year between Don Trump Jr. (the president’s son) and Rob Goldstein, an intermediary with Russia. According to Mr. Trump, who released the emails today, the point of the discussion was the Magnitsky Act, which related to sanctions placed on Russian officials by the U.S. Congress in 2012.

Repealing the act and lifting its sanctions is widely known to be a high priority for the Russian government. The only plausible reason why Russian agents would want to discuss the Magnitsky Act with the Trump campaign, during the election, would be to lobby for repeating the act.

You can read and download the whole email exchange here (released by Mr. Trump). The very earliest messages in the thread had Mr. Goldstein saying, quite explicitly, that the meeting’s purpose was to reveal allegedly incriminating information about Hillary Clinton, for the purposes for helping Donald Trump’s campaign. And, “This is obviously very high level and sensitive information but is part of Russia and its government’s support for Mr. Trump.”

Don Trump Jr. did not push back on or question Mr. Goldstein’s assertion that the Russian government was actively seeking to help his father. In fact, he said, “… if it’s what you say I love it.”

Meanwhile, President Donald Trump continues to insist that any connection between his campaign and the Russian government is “fake news.” Despicable.

No more mansplaining: 10 commandments for male clergy – and all lay l...
Scroll to top