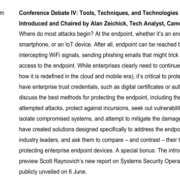 If you’re in London in a couple weeks, look for me. I’ll be at the NetEvents European Media Spotlight on Innovators in Cloud, IoT, AI and Security, on June 5.

At NetEvents, I’ll be doing lots of things:

The one-day conference will be at the Chelsea Harbour Hotel. Looking forward to it, and maybe will see you there?

What the WannaCry ransomworm means for you
Scroll to top