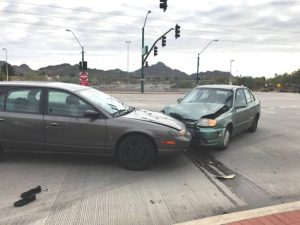 It was our first-ever perp walk! My wife and I were on the way home from a quick grocery errand, and we were witnesses to and first responders to a nasty car crash. A car ran a red light and hit a turning vehicle head-on.

As we pulled over to see if there were injuries, the young driver and passenger in the red-light runner got out of their vehicle… grabbed their backpacks… and ran. I got out our car and shouted at the kids to come back, and also managed to snap some quick cell-phone pictures.

We stayed behind at the accident scene to check out the victim (a nice but shaken woman). We also waited with her until the fire and then police arrived.

Other witnesses followed the perps, who ran into a supermarket and hid in the bathroom, and they called 9-1-1 about it. A few minutes later we learned “They got them!” — and the police officer at the accident scene asked us to drive to the supermarket parking lot and see if we could identify the runners.

So: I sat in the back of a car, and my wife hid behind a tree. The perps were taken one-at-a-time out of a patrol car to see if we could recognize them. The police were very careful to make sure the kids didn’t see us. They were indeed the runners — we could easily confirm that, and they clearly matched the photos on my phone.

After the ID, the police sent us home, with thanks. We’d like to commend Phoenix police and fire for their professionalism.

What a day, and what an adventure. While we hope that the kids had insurance (the woman’s car was totaled), we are especially grateful that nobody was injured, and that justice will be done.

How to take existing enterprise code to Microsoft Azure or Google Cloud Pla...

The top cloud and infrastructure conferences of 2017
Scroll to top