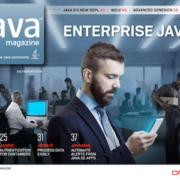 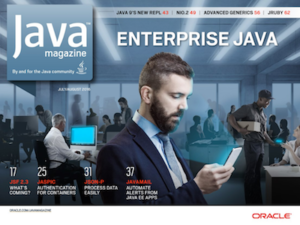 The newest issue of the second-best software development publication is out – and it’s a doozy. You’ll definitely want to read the July/August 2016 issue of Java Magazine.

(The #1 publication in this space is my own Software Development Times. Yeah, SD Times rules.)

Here is how Andrew Binstock, editor-in-chief of Java Magazine, describes the latest issue:

…in which we look at enterprise Java – not so much at Java EE as a platform, but at individual services that can be useful as part of a larger solution, For example, we examine JSON-P, the two core Java libraries for parsing JSON data; JavaMail, the standalone library for sending and receiving email messages; and JASPIC , which is a custom way to handle security, often used with containers. For Java EE fans, one of the leaders of the JSF team discusses in considerable detail the changes being delivered in the upcoming JSF 2.3 release.

We also show off JShell from Java 9, which is an interactive shell (or REPL) useful for testing Java code snippets. It will surely become one of the most used features of the new language release, especially for testing code interactively without having to set up and run an entire project.

And we continue our series on JVM languages with JRuby, the JVM implementation of the Ruby scripting language. The article’s author, Charlie Nutter, who implemented most of the language, discusses not only the benefits of JRuby but how it became one of the fastest implementations of Ruby.

For new to intermediate programmers, we deliver more of our in-depth tutorials. Michael Kölling concludes his two-part series on generics by explaining the use of and logic behind wildcards in generics. And a book excerpt on NIO.2 illustrates advanced uses of files, paths, and directories, including an example that demonstrates how to monitor a directory for changes to its files.

In addition, we have our usual code quiz with its customary detailed solutions, a book review of a new text on writing maintainable code, an editorial about some of the challenges of writing code using only small classes, and the overview of a Java Enhancement Proposal (JEP) for Java linker. A linker in Java? Have a look.

The story I particularly recommend is “Using the Java APIs for JSON processing.” David Delabasseé covers the Java API for JavaScript Object Notation Processing (JSR-353) and its two parts, one of which is high-level object modal API, and the other a lower-level streaming API.

It’s a solid issue. Read it – and subscribe, it’s free!

5 things you should know about email unsubscribe links