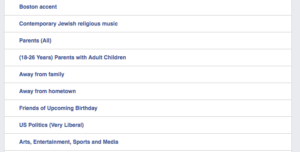 As Aesop wrote in his short fable, “The Donkey and His Purchaser,” you can quite accurately judge people by the company they keep.

I am “very liberal,” believes Facebook. If you know me, you are probably not surprised by that. However, I was: I usually think of myself as a small-l libertarian who caucuses with the Democrats on social issues. But Facebook, by looking at what I write, who I follow, and which pages I like, probably has a more accurate assessment.

The spark for this particular revelation is “Liberal, Moderate or Conservative? See How Facebook Labels You.” The article, by Jeremy Merrill, in today’s New York Times, explains how to see how Facebook categorizes you (presumably this is most appropriate for U.S. residents):

Try this (it works best on your desktop computer):

That will bring you to a page featuring your ad preferences. Under the “Interests” header, click the “Lifestyle and Culture” tab.

Then look for a box titled “US Politics.” In parentheses, it will describe how Facebook has categorized you, such as liberal, moderate or conservative.

(If the “US Politics” box does not show up, click the “See more” button under the grid of boxes.)

Part of the power of Big Data is that it can draw correlations based on vague inferences. So, yes, if you like Donald Trump’s page, but don’t like Hillary Clinton’s, you are probably conservative. What if you don’t follow either candidate? Jeremy writes,

Even if you do not like any candidates’ pages, if most of the people who like the same pages that you do — such as Ben and Jerry’s ice cream — identify as liberal, then Facebook might classify you as one, too.

This is about more than Facebook or political preferences. It’s how Big Data works in lots of instances where there is not only information about a particular person’s preference and actions, but a web of connections to other people and their preferences and actions. It’s certainly true about any social network where it’s easy to determine who you follow, and who follows you.

Here is that Aesop fable, by the way:

The Donkey and his Purchaser

A man who wanted to buy a donkey went to market, and, coming across a likely-looking beast, arranged with the owner that he should be allowed to take him home on trial to see what he was like.

When he reached home, he put him into his stable along with the other donkeys. The newcomer took a look round, and immediately went and chose a place next to the laziest and greediest beast in the stable. When the master saw this he put a halter on him at once, and led him off and handed him over to his owner again.

The latter was a good deal surprised to seem him back so soon, and said, “Why, do you mean to say you have tested him already?”

“I don’t want to put him through any more tests,” replied the other. “I could see what sort of beast he is from the companion he chose for himself.”

Moral: “A man is known by the company he keeps.”

When meeting to exchange goods bought online, be safe and careful

Though this Medium: using of Internet has been greatly Abused, says scammer
Scroll to top