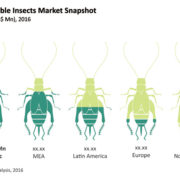 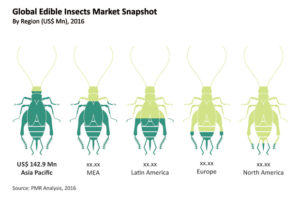 As a technology analyst, I read a lot of market reports. Most are not as crunchy (and unpalatable) as  the Global Market Study on Edible Insects, by Persistence Market Research.

Some takeaways from the report’s summary:

In terms of value, the global edible insects market is anticipated to expand at a CAGR of 6.1% during the forecast period and is expected to account for US$ 722.9 million by 2024 end. Orthoptera (cricket, grasshopper, and locusts) segment is projected to register a CAGR of 8.1% over the forecast period, driven by rising demand for cricket granola bars, cricket crackers, cricket cookies, and cricket chocolates. Of the various edible insect type products, the beetle’s segment is estimated to account for approximately 30.8% share of the global market share in 2016, and caterpillars segment is estimated to account for 17.9% share.

Demand for edible insects in countries in Europe is on the rise, primarily owing to factors such as low risk of disease – as transmission of zoonotic diseases (diseases transmitted from animals to humans) such as H1N1 (bird flu) and BSE (mad cow disease) is low with regard to insects – and higher protein and nutrients and micronutrients such as copper, iron, magnesium, manganese, phosphorus, selenium and zinc, and fatty acids in comparison to meat and fish products. Insects are particularly important as a food supplement for undernourished children owing to easier digestibility.

Yeah, I guess it makes sense…. but still. More info:

On the basis of insect type, the global edible insect market is segmented into beetles, caterpillars, hymenoptera (wasps, bees, and ants), orthoptera (cricket, grasshopper, and locusts), true bugs, and others (termites, dragonflies, flies, and etc.) segments.

Insect rearing involves low capital investment as compared to that needed for another conventional livestock rearing such as cattle, swine, and chicken. Substantial increase in global population and decreasing resources are other factors expected to drive demand for alternative food sources. According to United Nations, global population in 2050 is expected to reach 9 billion, significantly outgrowing existing food resources. Insects contain high protein and amino acids and can be a sustainable food source in future.

People or programs: What’s the best for your synagogue?