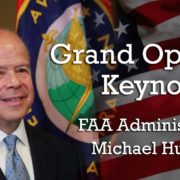 You’ve gotta be there! Michael Huerta was just announced as Grand Opening Keynote at InterDrone, the industry’s most important drone conference.

InterDrone 2015 was attended by 2,797 commercial drone professionals from all 50 states and 48 countries, and InterDrone 2016 will be even bigger!

New for 2016, InterDrone offers three targeted conferences under one roof:

Class content includes drone use for real estate and resort marketing, action sports and movie filming, news gathering – and any professional activity where the quality of the image is paramount.

A little about Mr. Huerta, the Grand Opening Keynote:

Michael P. Huerta is the Administrator of the Federal Aviation Administration. He was sworn into office on January 7, 2013, for a five-year term. Michael is responsible for the safety and efficiency of the largest aerospace system in the world. He oversees a $15.9 billion budget, more than 47,000 employees, and is focused on ensuring the agency and its employees are the best prepared and trained professionals to meet the growing demands and requirements of the industry. Michael also oversees the FAA’s NextGen air traffic control modernization program as the United States shifts from ground-based radar to state-of-the-art satellite technology.

A Seven-Point Plan for Automotive Cybersecurity