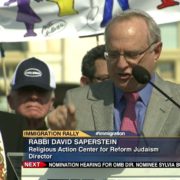 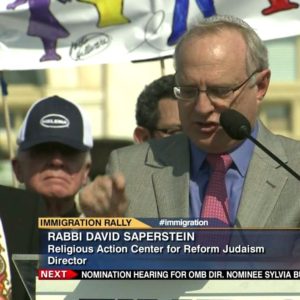 Justice, justice shall you pursue, that you may live, and inherit the land which the Lord your God gives you.

Those famous words are from Parshat Shof’tim, which this year was read in mid-August. As we begin our preparation for Rosh Hashanah and the Yamim Noraim (Days of Awe), let us not leave the wisdom of Shof’tim behind.

In Hebrew, the first three words of this commandment are “tzedek, tzedek, tirdof.” The word “tzedek,” or “justice,” is repeated, and according to many commentators, the repetition provides special emphasis. Justice means more than following the literal meaning of laws. That’s necessary but not sufficient. Rather, we are instructed to treat others — not just our family, not just our friends, but everyone in our community — with dignity, fairness and compassion.

Our synagogue, Peninsula Temple Sholom, is a member of the Union for Reform Judaism, and one of the flagships of the Reform movement is the Religious Action Center of Reform Judaism, established in Washington, D.C., in 1961.

Under the visionary leadership of Rabbi David Saperstein, the RAC has become influential in the United States, Israel, and the rest of the world, fighting for programs like comprehensive immigration reform, the Convention on the Rights of Persons with Disabilities, reducing gun violence, abortion rights, LGBT marriage equality, civil liberties, supporting Women of the Wall, and much, much more.

I am very proud of the work done by the RAC, and to call Rabbi Saperstein a friend.

Closer to home in California, there is a new organization called Reform CA — which was created this February by the Pacific Association of Reform Rabbis (PARR) and our own Rabbi Dan Feder, right here in the PTS Chapel.

Reform CA describes its mission as:

Reform CA is a campaign of the California Reform Movement to act powerfully together for justice in our state. As a project of all the social justice initiatives of the Reform Movement: the Peace and Justice Committee of the CCAR, the Religious Action Center, and Just Congregations, we feel called to come together as a Movement to play a role in repairing the California dream. We join with one another to address systemic issues of injustice that hurt our families and our brothers and sisters across lines of race, class, and faith. Justice has been at the foundation of our Movement since its inception and we proudly stand on the shoulders of the giants of justice who came before us. Acting together, we are partners to one another, as we seek to build a California that is just, compassionate, thriving, and inspiring.

Reform CA is currently focusing on immigration reform. For example, it is lobbying for the Trust Act, a piece of California legislation that limits the state’s participation in Secure Communities, a Federal program that requires state and local law enforcement to share the fingerprints of people booked in local jails with immigration officials — and can lead to deportation of young people who have done nothing more than call the police to report a local crime.

Kolot: Connecting Our Voices. We come together in congregation-wide conversation to foster relationships, deepen trust, identify issues that impact our lives at PTS and beyond, and go into action together. We understand each other better when we listen to one another. We multiply our potential to bring about change when we raise our voices together. Acting powerfully for justice, we create a community that is bonded, compassionate, thriving, and inspiring.

The change we make is up to us, and it begins with telling our stories and getting to know each other better within the PTS community. You will hear more about Kolot (pronounced koh-LOTE) over the High Holy Days from our clergy and from the lay leadership.

Kolot is co-chaired by Heidi Schell, a member of the PTS board, and Neal Tandowsky. Working tirelessly on this effort is a large steering committee, as well as Rabbi Feder; Rabbi Rebekah Stern; Rabbi Stephanie Kolin, Co-Director of Just Congregations at the URJ; and Sister Judy Donovan, a community organizer with the Bay Area Industrial Areas Foundation. Thank you all!

This new initiative is the next phase in our Sukkat Shalom, our shelter of peace, and has the potential to transform both Peninsula Temple Sholom and our community.

Please connect your voice to ours. Tzedek, tzedek, tirdof. Justice, justice, let us seek it together.