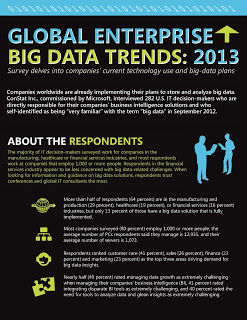 Just about everyone is talking about Big Data, and I’m not only saying that because I’m conference chair for Big Data TechCon, coming up in April in Boston.

Take Microsoft, for example. On Feb. 13, the company released survey results that talked about their big customers’ biggest data challenges, and how those relate to Big Data.

In its “Big Data Trends: 2013” study, Microsoft talked to 282 U.S. IT decision-makers who are responsible for business intelligence, and presumably, other data-related issues. To quote some findings from Microsoft’s summary of that study:

• 32% expect the amount of data they store to double in the next two to three years.

• Respondents reported an average of 38% of their current data as unstructured.

• 89% already have a dedicated budget for a Big Data solution.

• 72% have begun the planning process but have not  yet tested or deployed a solution; of those currently planning, 76% expect to have a solution implemented in less than one year.

• 62% said developing near-real-time predictive analytics or data-mining capabilities during the next 24 months is extremely important.

• Respondents expect an average of 37% growth in data during the next two to three years.

I can’t help but be delighted by the final bullet point from Microsoft’s study. “Most respondents (54 percent) listed industry conferences as one of the two most strategic and reliable sources of information on big data.”

Hope to see you at Big Data TechCon.

From Apple to Microsoft to Tesla, rumors abound

Daily miracles and surviving in the desert
Scroll to top