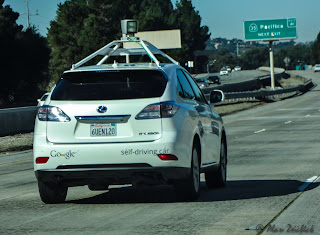 So much I could write about today. The U.S. presidential elections. Intel’s new 60-core PCIX-based coprocessor chip. The sudden departure of Steven Sinofsky from Microsoft, after three years as president of the Windows Division. The Android 4.2 upgrade that unexpectedly changed the user experience on my Nexus phone. All were candidates.

Nah. All those ideas are off the table. Today, let’s bask in the warm geekiness of the Google Self-Driving Car. The vehicle, an extensively modified Lexus RH450h hybrid sport utility, lives here in Silicon Valley. The cars are frequently sighted on the highways around here, and in fact my wife Carole saw one in Mountain View last week.

Until today, I had never seen one in action, but at lunchtime, the Self-Driving Car played with me on I-280. If you’re not familiar with the Google Self-Driving Car, here’s a great story in the New York Times about one of the small fleet, “Yes, Driverless Cars Know the Way to San Jose.”

I encountered the Google car going northbound on I-280, and passed it carefully. Many cars lengths ahead, I carefully changed into its lane and slowed down slightly — and waited to see what the self-driving car would do.

The Google car approached slowly, signaled, moved into the next lane, and passed me. I was taking pictures out the window — and the Google engineer sitting in the passenger seat smiled and waved. It was just another day for the experimental hardware, software and cloud-based services.

Yet, why do I have the feeling of having a Star Trek-style First Contact with an alien artificial life form? It is wonderful living in Silicon Valley and being a participant in the evolution of modern technology – both at the IDE and behind the wheel.