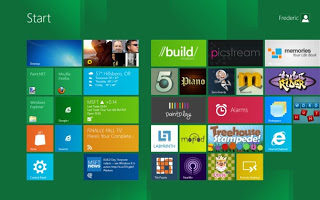 The group Berlin wrote the song The Metro in 1983. The lyrics evoke rail trips through London and Paris, walking along the Seine, and of course, a romantic  breakup. It’s a great song.

Microsoft used the term Metro to describe the design language and user interface introduced for Windows Phone. Consisting of an array of different-sized tiles in bright primary colors, Metro was reminiscent of the game Tetris, and also of a tic-tac-toe board. The Metro interface is crisp, clean and fresh – and when combined with active content (aka Live Tiles), it brought Windows Phone a user experience that was both attractive and functional.

Microsoft loves Metro. After Windows Phone hit the market with the Metro UX, the design began finding its way into everything from Microsoft marketing (like for the Build 2011 conference and numerous web pages) to the forthcoming Windows 8.

According to Microsoft’s developer tutorial on Metro,

Metro is the name of the new design language created for the Windows Phone 7 interface. When given the chance for a fresh start, the Windows Phone design team drew from many sources of inspiration to determine the guiding principles for the next generation phone interface. Sources included Swiss influenced print and packaging with its emphasis on simplicity, way-finding graphics found in transportation hubs and other Microsoft software such as Zune, Office Labs and games with a strong focus on motion and content over chrome.

Not only has the new design language enabled a unique and immersive experience for users of Windows Phone 7; it has also revitalized third party applications. The standards that have been developed for Metro provide a great baseline, for designers and developers alike. Those standards help them to create successful gesture-driven Windows Phone 7 experiences built for small devices.

Alas, Microsoft doesn’t love the Metro name, not any more. The company is slowly scrubbing the Metro name from both Windows Phone and Windows 8, in favor of the less-colorful phrase “the Windows 8 style UI” for the design language. AT press time, the developer tutorial about still referred to “Metro.”

However, yes, you should begin referring to the Windows Phone 7.x user experience as the Windows 8 style UI. Got it?

Why the name change? According to reports, such as this one from the BBC, the German company Metro AG — which describes itself as the world’s fourth-largest retailer — has told Microsoft to cease and desist. Microsoft is ceasing and desisting. {http://www.bbc.com/news/technology-19108952}

No matter what the name, Metro is a powerful language and an excellent metaphor for a mobile device user experience, where icons represent not only actions but also information. The Metro design represents one of the most innovative differentiators of Windows Phone. While I’m less enthusiastic about it on a Windows laptop, Metro remains one of the most creative developments seen out of Redmond in many years.

Riding on the Windows 8 style UI.

Vacuum cooking as a metaphor for agile development