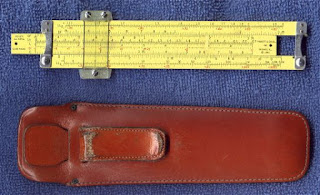 What does mobility mean to you? To many of us, it means smartphones like Android devices, the iPhone, a Windows Phone, or even a BlackBerry. For others, particularly those who live in the past, it means a slide rule.
The notion of mobility came up at AnDevCon II – the Android Developer Conference put on by BZ Media, the company behind SD Times and News on Monday. Held in the Bay Area last week, we had more than 1200 registrants, nearly all of whom were interested in my historical slide rule collection.
The most popular model, according to an informal poll, was the Pickett N600-ES (pictured). It’s a little aluminum slide rule carried on five Apollo space missions as a backup computer by astronauts like Buzz Aldrin. Folks were also fascinated by my Nestler 23, a German model favored by scientists and engineers like Albert Einstein and Werner von Braun.
You can play with a virtual N600-ES in a web browser or even download a free simulator app for an Android phone or tablet.
Slide rules are a curiosity today. But the applications for a smartphone are boundless.
During his keynote talk, Bruce Jones, a developer evangelist at HTC, painted the picture of tablet apps that might let musicians draw and edit the notes of a score with their finger or pen on digital staff paper – and then hear the song.
During a Q&A session, while I was running around a room with a wireless microphone, I had the idea for an app that would let attendees enter a queue to ask questions by pressing a button. When it was their turn to talk, their phone display would show a green indicator – and then they could speak right into their phone, and their voice would be amplified by the room’s P.A. system. Who needs a microphone when you have a smartphone and WiFi?
Perhaps those apps already exist – if not, they will soon, I’m sure.
What ideas do you have for smartphone apps?
Z Trek Copyright (c) Alan Zeichick
November 12, 2011/2 Comments/by Alan Zeichick
https://alanzeichick.com/wp-content/uploads/alan-zeichick-logo.png 0 0 Alan Zeichick https://alanzeichick.com/wp-content/uploads/alan-zeichick-logo.png Alan Zeichick2011-11-12 19:13:002011-11-12 19:13:00On slide rules and smartphones
2 replies