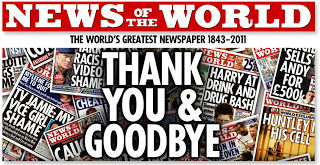 Like many of you, I’ve been riveted by the expanding drama with News Corp.’s flagship British newspaper, News of the World. What started as an apparently straight-forward phone-hacking scandal (where journalists guessed voicemail passwords and listened to a murdered girl’s phone messages) got worse. Rapidly.
We learned that the reporters from News of the World allegedly went far beyond listening to messages from desperate relatives in order to get “scoops.” The reporters also deleted the voicemail messages to clear space in the mailbox and deny them to competitors. This give the young girl’s parents false hope that she was alive, and also potentially hampered the search for her.
We learned that reporters allegedly hacked into messages from lots of people. They target hundreds, it seems, of celebrities, politicians, the Royal family, even British police investigators.
We learned that that the News Corp. is too close to politicians in the United Kingdom’s two largest parties, Labor and Conservative. (We already knew that News Corp.’s Fox News subsidiary is tight with the United States’ Republican party, and even has many of that party’s most influential figures on its payroll.)
We learned that News Corp. is now in full spin mode. The company closed News of the World and sacked hundreds of workers, dropped a high-profile bid for full ownership of British cable TV provider BSkyB, and hired the top-shelf public relations company Edelman to help them spin the crisis.
We learned that several of the company’s top U.K. and U.S. executives have fallen on their swords (and have since been arrested). The company’s CEO, Rupert Murdoch, has offered profuse apologies to the slain girl’s family and to the public.
I was in the United Kingdom over the past two weeks. Watching this story unfold on that side of the pond gave me a deep appreciation of how disgusted ordinary British citizens are at the shameless, self-serving antics of journalists, publishers and the media as a whole. (When people asked what I do for a living, I usually responded, “I’m a journalist.” The reaction was rarely positive.)
While I’m appalled by this scandal, I’m not naïve. The deep-seated problems with the media go far beyond News Corp., which merely happens to be the most brazen of the media companies. Many, if not most, if not all, of the major media companies routinely cross the line in order to get “scoops.” Publishers across the U.S., U.K. and elsewhere influence government by pushing their own agendas. Publishers support parties or politicians who will help their business or ideology, and ruthlessly retaliate against anyone who steps out of line.
We see slanted editorial in our newspapers, on television and on the Web every day. Events are filtered by the publisher’s self-serving view of who should win or who should lose – which means that everything good done by the publisher’s enemies is twisted and distorted to resemble evil, while misdeeds done by the publisher’s friends are covered up or spun into a positive.
It’s not only politics, of course, where the media fall down. Reporters and publishers suck up to major influencers – and those influencers, in turn, suck up to reporters. For too many reporters, analysts, commentators and editors, the job is simply to drive the publisher’s bottom line, which means writing dumb-downed sensational stories that get lots of Web hits, fawning over influencers and pushing the publisher’s political agenda.
That’s not what journalism is supposed to be. Yet that’s what we see in the unfolding News Corp. scandal, and it’s symptomatic of the entire media world.
It’s a vicious cycle. I fear that nothing is going to change.
Z Trek Copyright (c) Alan Zeichick
July 17, 2011/1 Comment/by Alan Zeichick
https://alanzeichick.com/wp-content/uploads/nw.png 165 320 Alan Zeichick https://alanzeichick.com/wp-content/uploads/alan-zeichick-logo.png Alan Zeichick2011-07-17 17:00:002013-09-26 05:45:20Media Scandals
1 reply

My take on the Samsung Series 5 Chromebook
Scroll to top