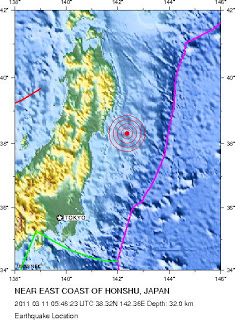 The earthquake and tsunami in Japan were horrific in scope. The subsequent challenges with the Japanese nuclear power plants has magnified the disaster. Where will it end? How many lives were lost, how many families shattered? As I write this, the world has many questions, but sadly, not many answers.

Like many of you, my thoughts first turned to my friends and family members who live in Japan. I was gratified to quickly learn that all were safe – in large part, due to social networking. Rather than jamming up phone lines, for example, I could see a cousin’s Facebook posts and see that he, his wife and his young daughter were out of harm’s way.

Natural disasters can strike anywhere. Earthquakes, of course, are an ever-present danger in Northern California, where I live. Flood, fires, hurricanes, airplane crashes, those are only some of the hazards. In some countries, of course, there’s also the threat of war, of oppression, of rebellion – we’re reading about that in the news headlines. It’s a dangerous world we live in. For too many of us, surrounded by all our luxuries and technology, it’s easy to forget that.

There’s a lot that we could talk about today. About how social media is making the world smaller. How cloud-based apply and backups can help a business (or a family) recover quickly in the event of a property loss. About how distributed software development lets us experience more of the world’s diversity than traditional on-premise organizational models.

But instead I’ll say: Be safe.

Java, the Smithsonian, and Android Honeycomb