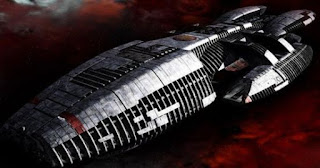 It came from the original Battlestar Galactica television show in the 1970s, but “frak,” as a generic swear word, is all over the delightfully reimagined series, which debuted in 2003.

And according to this story on CNN, “The curse word ‘Battlestar Galactica’ created,” it’s all over everything else. As the story says,

“Dilbert” creator Scott Adams calls the word “pure genius.” “At first I thought ‘frak’ was too contrived and it bothered me to hear it,” Adams said. “Over time it merged in my mind with its coarser cousin and totally worked. The creators ingeniously found a way to make viewers curse in their own heads — you tend to translate the word — and yet the show is not profane.”

While I haven’t yet begun saying “frak” or “what the frak,” maybe I should. What the heck, eh?

If you haven’t been following the new BSG (as fans call it), the place to start is with the 2003 miniseries.

I love the Lotus Esprit, and so do Daily Telegraph readersWi nøt trei a høliday in Sweden this yër?
Scroll to top