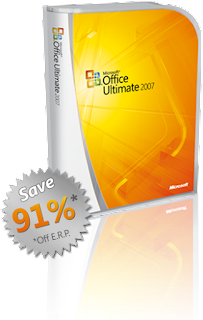 I think that’s what Microsoft wants. In any case, they are running a big promotion selling Office Ultimate 2007 for $59.95. The promotion is called “The Ultimate Steal.” The company says you can save 91% off the estimated retail price.

Isn’t Microsoft against stealing software? The company goes to tremendous lengths to stop Windows XP and Windows Vista from being stolen. The Genuine Advantage program, for example, has been known to arbitrarily decide that legally licensed versions of Windows are pirated, and it’s up to you, Mr. or Ms. Consumer, to convince Microsoft otherwise.

The Ultimate Steal is only for the Windows version of Office Ultimate 2007. There’s no comparable program for Office 2008 for Macintosh.

It’s also only for college or university students. “You must have a valid e-mail address at an educational institution ending with the domain suffix .EDU,” or attend one of a group of listed schools that don’t use the .EDU domain.