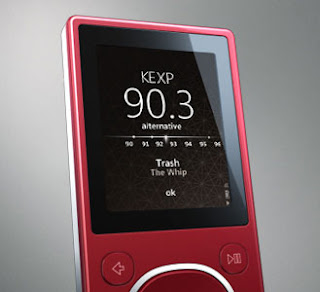 Microsoft built some great features into its Zune music player. Not enough, apparently, to break Apple’s lock on the market with the iPod product family, it’s true. However, if someone just compares the specs of current Zune hardware and software against that of the Zune, the Zune ain’t so bad.

Yes, I mean the FM radio. That’s the one “killer” feature that Apple doesn’t include with the iPod. With most iPod models, you can add an external FM tuner, either from Apple or from third-party providers. Even so, I really wish that Apple had included a radio.

The other big plus is the Zune Pass subscription, which gives full access to the Zune store for $14.99/month. Says Microsoft:

For the price of just one CD a month, you can download and listen to millions of tracks from Zune Marketplace* whenever you want. The songs are yours to keep as long as you keep your Zune Pass valid.

Just get a Zune Pass that’s good for either one or three months at a time. Charge it directly to your credit card, or enter a code from a prepaid card.

Songs you get with a Zune Pass can be copied to up to three computers and three Zune players, but they can’t be burned to CD. If you want to do that, buy those songs with Microsoft Points.

On Sept. 16, Microsoft released a major upgrade to the Zune software. Version 3.0 is focused on making it easier for customers to buy software online. The biggest news is that customers can now download software “over the air” from the Zune Marketplace store.

The Zune 3.0 software also provides a feature similar to Apple’s new Genius. The “Your Picks” software suggests songs in the Zune Marketplace that are similar to those that are already loaded into your music collection, while “Channels” generates dynamic playlists based on your taste. However, Microsoft goes farther: You can also download dynamic playlists based on suggestions from radio stations and magazines.

Very clever. Will it be enough to boost the Zune? Probably not; Apple has too much of a head start, and the extra Zune features only appeal to those who are shopping by doing a feature comparison. I doubt that many new iPod buyers even look at competing technology, and once you’re into the ecosystem, the switching costs are high.