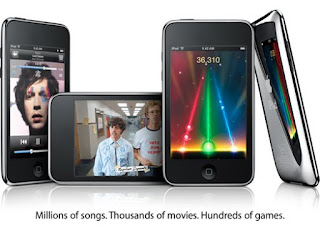 With its iPod touch 2.0, released this past week, Apple got it right. The company kept the features that worked really well with the original iPod touch, and added in some of the advances that appeared in the iPhone 3G.

The major changes to the iPod touch in the second generation are:

Of course, the rumor mill had been flying. Some people predicted that Apple would add a GPS. Others said that it would have a built-in camera. or a microphone input that would work with VoIP. Nope… those remain iPhone-only features.

As the happy owner of both a first-generation iPod touch and an iPhone 3G, I think that Apple chose the right feature set. The speakers in the iPhone aren’t audiophile quality, but they’re perfect for when you don’t want to use headphones. I use the speakers, for example, when watching a movie in a hotel room.

The external volume control is a big plus. Changing volume with the standard iPod touch is a pain in the button, especially when you’re listening to music. You have to unlock the display, in many cases, and then make a number of presses and swiping motions. Now, you can just toggle the volume-control rocker switch.

The new lowered pricing is welcome:

Both my iPod touch and iPhone 3G are 16GB models, and that’s a good sweet spot. 8GB is too small to hold a decent selection of music and movies.

Want a bargain? If you’re not interested in the new features, Amazon is selling out a limited supply of first-generation iPod touches, at pretty good prices:

Frankly, though, I think the new features are worth the price difference.