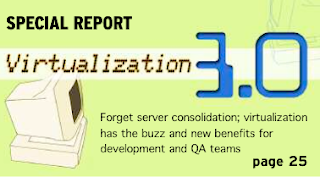 The special report in the May 15, 2008, issue of SD Times is entitled “Virtualization 3.0: Forget server consolidation; virtualization has the buzz and new benefits for developers and QA teams.”

Virtualization 3.0 is a brand-new buzzword that we use at SD Times to indicate, naturally enough, a third wave of virtualization.

The first wave was niche tools for the desktop. As you may recall, one of the first uses of VMware Workstation (which came out in 1999) was to help developers create test-bed UIs which contained specific toolsets, or which could be designed to replicate particular clients’ runtime environments. Virtualization 1.0 also appeared in forms like Connectix’s Virtual PC, which let Macs run Windows, albeit slowly. (Microsoft acquired Virtual PC later on, and it was bundled with Office 2004 Professional for the Mac.)

This first wave focused on letting desktop operating systems do things that they couldn’t do otherwise. Originally, most virtualization programs of this sort ran super-slowly; they consumed many CPU cycles, and sucked up too much memory, and in a single-threaded hardware environment, they were painful to use. However, if you really needed to emulate a specific environment for software testing, or if you really needed to run Outlook on a Mac, it worked.

The second wave of virtualization was driven by servers, with the big payoff being server consolidation. That’s where the big boom came in. Forget improving end-user productivity: here, the goal was to save money on servers and power. The second wave is behind nearly all of today’s popular interest in virtualization by CTOs, CIOs and data center managers, and for good reason: it can save companies a huge amount of money.

What about the third wave? Our special report, written by Andrew Binstock, explored the premise that virtualization is returning to the desktop in a new way. It’s not just for personal productivity or for enabling Macs to run Windows better (as you can do with Parallels, for example). The rise of multi-core machines, and improvement in hypervisor technology, is turning virtualization into the newest secret weapon for developers and testers. Read the special report, and you’ll see what we mean.