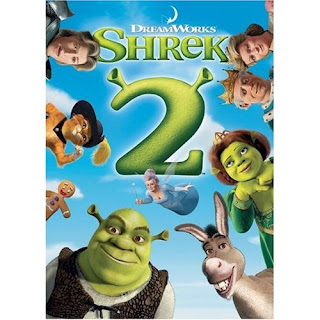 A principle of user interface design is that, as much as possible, the user should be in charge of the user experience.

Menu options, if visible, should work. The user should be able to start or stop actions, or guide the course of actions. The user interface designers should focus on the needs and desires of the user.

A user interface that places the user in control will be successful.

A user interface that makes the user feel helpless leads to frustration and anger.

Take, for example, the DVD of DreamWorks’ Shrek 2. This is was a very funny movie; my family enjoyed it in the theater when it came out in 2004, and we were looking forward to watching it tonight… until we became frustrated, and decided to channel our activities into something else.

When you put the DVD into the player, up comes a little animated teaser for DreamWorks Animation, followed by mandatory commercials. There’s nothing you can do but watch them, or let them play out.

DreamWorks configured the disc software so that you can’t skip over the commercials. You can’t fast-forward over them. You can’t even get to the disc menu until they’ve run their course.

For five minutes, we pushed buttons furiously on the remote. Nothing worked. We stopped the movie and restarted it; with some DVDs, that process bypasses the trailers and brings you to the disc menu.

But no, the DreamWorks’ DVD programmers were too smart. The disc started playing the Shark Tale commercial again.

DreamWorks: It’s my movie; I paid for it. It’s my DVD player, and my remote. Don’t tell me what I’m permitted to do, or that I can’t skip over your trailers. Don’t mandate that I’m “not allowed” to watch the movie until I’ve been forced to watch all your commercials. That’s not how to satisfy a customer, or design successful software for a system which, after all, was designed to put the user in control of his/her own viewing experience.