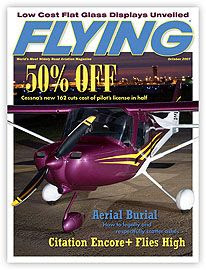 American Express says, “Membership has its privileges,” and among of the benefits of having a corporate Amex card are free magazines. Lots of free magazines.

One of the ways that American Express makes money is by providing demographically desirable people to third parties. I can tell, because I receive tons of catalogs, magazines and other things every week, all sent to the particular spelling of my name/address that’s on my Amex account.

My demographic within Amex’s cardholder database must be “wealthy business owner,” which is about half correct. Being part of that demographic means that for the past eight years or so, I’ve been receiving business magazines (some of which I read), golfing magazines (which I throw away), Smithsonian Magazine (which I occasionally read) and Wired. I like that I get Wired. Thanks, Amex.

This week, something new came: the November issue of Flying Magazine, “The World’s Most Widely Read Aviation Magazine.” I actually checked the label, to make sure that it wasn’t misdelivered to the wrong house. Looks like Hachette Filipacchi (which publishes Flying) wasted their money purchasing my name from Amex.

It was fun to flip through the magazine before tossing it into the recycling bucket. There was a hands-on review of the Piper Meridian, a $2 million six-seat single-engine turboprop. There was a story about an emergency out-of-fuel landing on the Pennsylvania Turnpike. There were lots of cool ads for airplane tires, flight insurance plans, automatic throttle systems, FAA exam study guides, lots of airplanes, and of course, information about Heli-Expo 2008 (Feb. 24-26 in Houston).

I was surprised to see that Flying Magazine still uses reader service cards (which the publishing industry refers to as “bingo cards”). If you circle #969 on the post-paid bingo card, for example, Cessna will send you information about its Citation Mustang dual-engine business jet. Most business-to-business titles stopped using reader-service cards many years ago.

Membership has its privileges!

Have you hugged your bandwidth today?I gave away a perfectly good HP scanner
Scroll to top