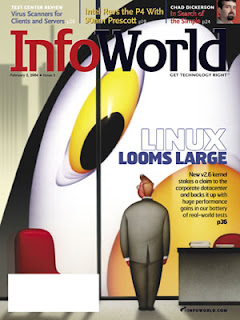 “Yes, the rumors are true. As of today, March 26, 2007, InfoWorld is discontinuing its print component. No more printing on dead trees, no more glossy covers, no more supporting the US Post Office in its rush to get thousands of inky copies on subscribers’ desks by Monday morning (or thereabouts). The issue that many of you will receive in your physical mailbox this week — vol. 29, issue 13 — will be the last one in InfoWorld’s storied 29-year history.“

It’s difficult for me to assess how much impact this will have on InfoWorld’s business, but frankly, I don’t see it as a positive development for its readers.

“But let me dispel any other rumors. InfoWorld is not dead. We’re not going anywhere. We are merely embracing a more efficient delivery mechanism — the Web — at InfoWorld.com. You can still get all the news coverage, reviews, analysis, opinion, and commentary that InfoWorld is known for. You’ll just have to access it in a browser (or RSS reader) — something more than a million of you already do every month.“

I flip through most issues of InfoWorld when they appear in my mailbox. Usually, I read one or two stories; sometimes, I read it cover to cover. Will I remember to browse to infoworld.com every week? Doubtful. The Web is great for searching for something specific, not for learning about new stuff you don’t know about yet.

Will the InfoWorld news feeds be distinguished from the myriad other RSS streams in my newsreader? Maybe. Maybe not. Will I keep reading its fantastic columns? The existing ones, yes, but it’ll be hard for new columnists to build awareness. Soon, will I just read eWeek instead? Probably. (I wonder how long before eWeek joins InfoWorld in the digital-only domain.)

Publications come, and publications go: That’s just how the magazine business works. However, the passing of InfoWorld is more bitter for me, because I’ve been writing for it for two full decades.

I started writing for InfoWorld when I worked for IDG in the mid-1980s, and have maintained a presence there ever since. I’m still listed on their masthead as a Senior Contributing Editor. (In fact, at an InfoWorld editorial gathering a few years back, someone was trying to figure out who had been associated with them the longest — and there was considerable surprise when it turned out to be yours truly.)

So, despite what Steve asserts, InfoWorld is dead. While the separate InfoWorld.com Web site is not dead, it’s not the same thing, not the same at all.