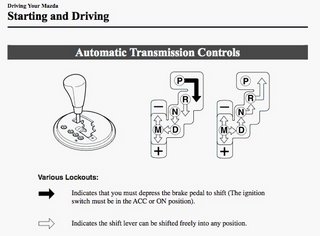 Standards are important. Not only for interoperability, but also for sanity.

Take, for example, our two family cars, a Mazda3 hatchback and an Acura TSX sedan. Both are great, peppy cars, and both have five-speed automatic transmissions with a manual shift override feature.

There are odd differences between the cars. For example, on the Mazda3, the controls for the sunroof are above the windshield. On the TSX, they’re on the left side of the cockpit. I think that Mazda’s design is more intuitive, but both are reasonable.

Another difference is in the naming for the stability/traction control feature. Mazda calls it DSC, for Dynamic Stability Control. Acura calls it VSA, for Vehicle Stability Assist. Same feature, though.

Of course, the Mazda3’s gas cap is on the right, and the TSX’s is on the left.

The real annoying difference, though, is in the gate for the manual shift override (which Mazda calls Manual Shift Mode, and Acura calls Sequential Sport Shift). I use this mode on the highway to keep the engine in a high RPM range for decent torque.

With both cars, with the gear selector in “D,” you shove the gearshift over to the left to activate the manual mode.

This, as you can imagine, drives me nuts. Where are standards when you need them?