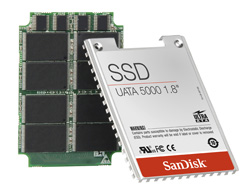 While we’re on the subject of storage: don’t forget solid-state drive technology. This week, SanDisk released a 32GB SSD that’s going to cost about US$600, and fits into a standard 1.8-inch form factor.

Sure, that’s a lot of money for a 32GB hard drive today. But given the incredible rate of change in flash memory, the capacity will go up and price will come down fast.

Let’s predict that the SSD doubles in capacity in the next 12 months, and the price comes down by 1/3. Would you pay an extra $400 to have a 64GB SSD in your notebook PC? Silent, less power consumption, no moving parts, super fast?

According to SanDisk, their solid-state drive consumes only 0.4 watts, compared to 1.0 watts or more for a standard rotating notebook hard drive. They also say the SSD has a sustained read date of 67 megabytes/second, more than 100x faster than a standard hard drive.

Terabyte drives, but too late to save Andrew XML schema for business gets better
Scroll to top