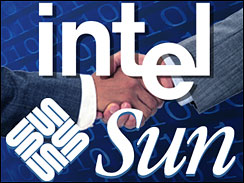 According to a CBS News report, Sun will soon be using Intel processors in some of its servers. In return, Intel will endorse the Solaris operating system.

If true, this is a good move for both companies, and potentially, for everyone except AMD, which has enjoyed an exclusive deal with Sun since November 2003.

Sun doesn’t win when it’s dogmatic. For years, it fought against Wintel with its SPARC processors. While there were sound technical reasons why the company chose AMD’s Opteron processors instead of Intel’s Xeon processors for its move to x86, there was some classic Sun attitude in there as well. Microsoft, despite its support for AMD’s processors, has long been close to Intel, and Sun’s arch-competitor, Dell, was always an Intel-only shop. Thus, one way for Sun to differentiate itself when selling commodity hardware was to snuggle up to AMD.

Times change. Dell ships a few AMD-based servers now, and Microsoft does a lot with AMD. In fact, in its public communications and technical documentation, Microsoft treats both companies’ processors equally, and it does marking with both. For example, AMD and Microsoft are jointly sponsoring a contest, called Vanishing Point.

AMD makes great processors. So does Intel. Sun, and Sun’s customers, win when the company is pragmatic, not dogmatic. Similarly, Intel gains no benefit from shunning Solaris; it should be an OS-neutral platform provider.

That leaves the obvious holdout, on the computer front, as Apple. Apple uses Intel processors exclusively… something that AMD execs have expressed frustration about. I’d love to see an iMac or Mac Pro running with Opteron processors.

>> Update 8:35am: Just received an invitation to a press conference with Sun ‘s Jonathan Schwartz and Intel’s Paul Otellini, at 10:00am today in San Francisco. Guess the deal’s real.